It is a good thing to receive input from others. As much as I have tried to figure out Impetus, I just wasn't getting it. A couple of followers suggested Hail Caesar. I had the rules already and had played in 15mm. I didn't think my basing would work, but I was wrong. Therefore, I am taking a second look at Hail Caesar in 28mm. I knew that I would need command bases, so over the weekend I scrounged around some old Victrix frames I had kept and found a host of unused figures. I have turned them into Republican Roman and Carthaginian command stands. I am pleased with how they turned out. What do you think? 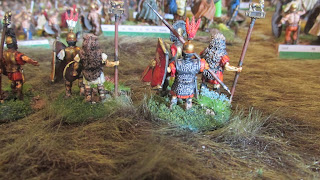