Here are some more pictures of my rebased troops. To the left is a Prussian regiment and a battery. There are five figures on each of four stands for a total of 20 figures per battalion.

These are some Russian cuirassiers. Each stand has three mounted figures with a total of 12 figures per regiment. 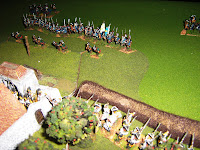 Here is a more general view of the Prussian advance on a built-up area held by the Austrians. 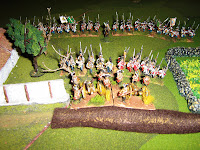 This last shot is of some Austrian grenadiers, four stands of five figures each, supported by a Hungarian line unit.

Progress is being made 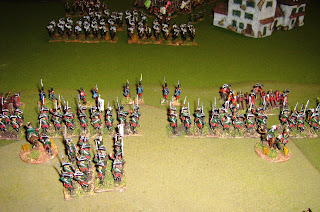 I have been quite busy on my rebasing project. To the left is a shot of some of the Russians I have completed. I am very pleased with the results so far. The Russians were fairly easy because I already had the correct number of figures, 16, for each battalion. I have done some Austrians, too, as I had 24 figures for each of their battalions. The Prussians, however, required four extra figures for each battalion, so I had some painting to do. The same is true for just about all of the cavalry. But I was able to pick up a huge amount of figures for a very good price, so I will have everything I need to complete the project and then some.

The Old Glory SYW line is one of their best, in my humble opinion. They are a lot of fun to paint and quite colorful. The slightly larger bases make the units all that more attractive on the table. I'll be posting more shots in the next couple of days. Right now, however, my table is a mess of basing materials and scores of stands in various stages of progress.
Posted by Duke Winser at 10:04 AM No comments:

I am going to be hosting a General de Brigade game on Saturday, February 28, at my home in Torrance, California. If you'd be interested in participating, please reply to this post. So far there are three of us. We are shooting for an afternoon starting time of about 2:30 P.M. I have everything needed for the game, so you just need to bring yourself and your favorite beverage.
Posted by Duke Winser at 9:49 PM No comments:

Tell me I'm not crazy

I have a large collection of SYW figures, including armies from Prussian, Austria, Russian, France, and Hanover. I orginally based them for Warfare in the Age of Reason. Then I decided to re-base them, increasing the size of each regiment by 50%. I recently acquired a large amount of unpainted SYW figrues with the intent of painting them and the reselling them. But I made the misake of checking out the DieKriegspunt blog and associated web sites. I have decided to rebase the figures once again, but making them a little bit larger so that I can make them more appealing visually.

I have justifed this exercise with the reasoning that basing materials are a heck of a lot cheaper than figures. I enjoy the process and the result is much better than what I had before. I'll post some before and after pictures soon. Most of my regiments are fine. I'll need to add some figures to fill out my Prussian units, but I have a ton of them, so this won't be a problem, and it's only 4 figures per batallion. That's pretty easy. My biggest challenge will be in filling out the artillery, but I think I have enough unpainted guns to do the trick.

The larger bases take up more space, which creates storage probelms, but they look much better. I can use the units for either rule set, so I haven't burnt any bridges there. So I'll have some fun at a very low cost. In these economic times I think that is a good thing. But perhaps I am just rationalizing. Is this a hobby, or an obesession?
Posted by Duke Winser at 6:01 PM No comments:

For the last seven summers I have taught a class in my hometown using my miniatures. I have been very pleasantly surprised at how well these young people have picked up the rules and enjoyed the gaming experience. One of the best games during this run was a recreation of the battle of Germantown fromm the American Revolution. The rules we used were an adaptation of the Johnny Reb rules known as Johnny Tremaine. I like the regimental feel of them. The picture below captures the scene before any action takes place. The British and Hessians are to the right and the Americans will be launching their attack from the right and top of the picture. 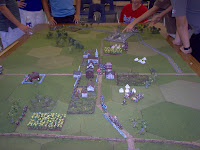 The American strategy was to pin the two flanks with cautious attacks and to make their main effort on the town of Germantown itself. Below is a picture of the elite British units that held the right flank.

The action began with the Continentals attacking the town in force.

Within two turns, the men in blue were involved in a vicious mele at a stone wall to the south of the town. The action swayed back and forth and casulaties mounted. 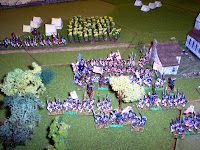 To relieve pressure on the center, the Americans launched a secondary assault on the British right. The grenadiers couner-attacked and were routed in a truly stunning outcome. 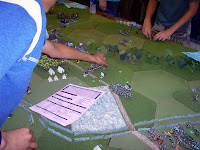 The photo below shows the action on the British right, just prior to the rout of the grenadiers. 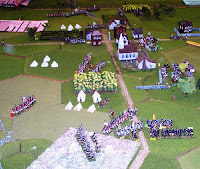 On the British left, a large force of colonial militia attempted to hold down the Hessian contingent. While they were successful in tying down a large portion of the allied force, they were eventually overwhelmed and driven from the field. This was the one bright spot for the men in red. 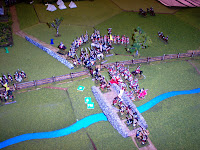 The Americans won the day, contrary to the historical result. The turning point was a very poor results roll for the British grenadiers. Once they routed, the right flank crumbled like a stale cookie.