I just finished some Perry plastic French dragoons.  It was the last of the available cavalry kits that I had yet to paint.  It contained a lot of great stuff: 13 mounted dragoons, 8 dismounted plus three French and three British infantry casualty figures.  The figures were very easy to assemble and I was pleased with the overall result.  Here are a few photos. 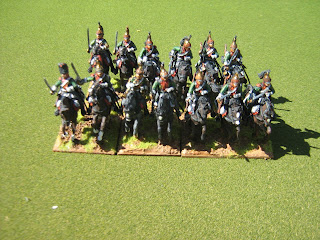 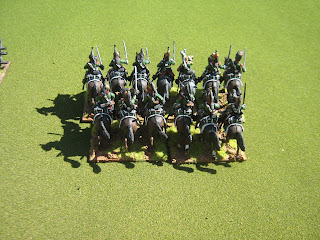 I had fun making the bases for the dismounted figures.  Here are a couple of shots of them: 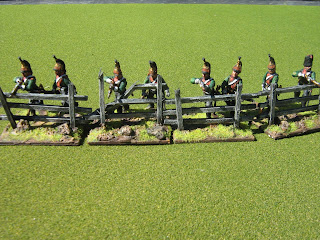 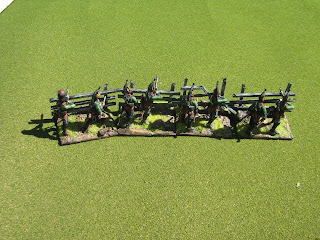 As it was a very nice day, I decided to take a few shots of my entire collection.  It has grown to be quite formidable, and it was good to get them out of the display case and out into the sunlight. 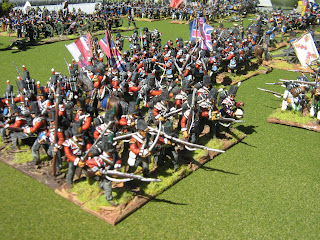 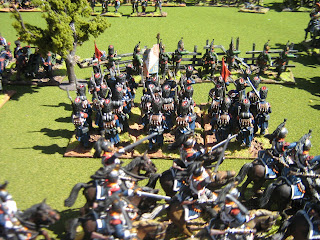 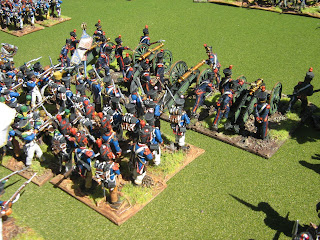 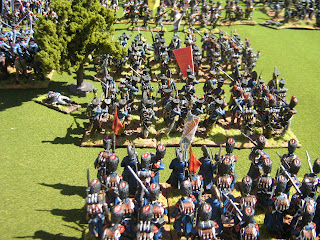 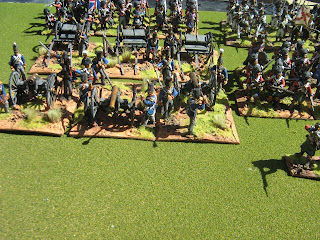 I have to say, I really enjoy painting these plastic 28mm figures.  There is so much detail that it's hard to go wrong.  I hope you enjoy.

Posted by Duke Winser at 3:11 PM No comments:

I played out a few rounds of my Peach Orchard scenario on a solo basis.  It was an illuminating experience.  First an overview and then an analysis.

The first two turns were devoted to exchanges of artillery fire.  Both sides took substantial losses on their batteries.  The Yankees took a bit more of a beating.  Even so, both sides were still potent forces for any infantry that would try to close range with them.

Kershaw began his advance on the Confederate right flank on turn one.  By turn two he took casualties on his flank as he advanced past the southern flank of the peach orchard.  This caused him to commit two regiments to attacking the Union soldiers posted there while the rest of the brigade, followed by Semmes men, advanced against the Federal guns posted along the Wheatfield Road.

Turn three saw Kershaw's men go in against the Peach Orchard, only to be turned back after a fairly bloody mele.  Barksdale's men also began their attack on the rebel left.  They experienced some significant casualties from the still lethal Union batteries to their front.  The net result was that the Peach Orchard, while still in the hands of the men in blue, was no longer tenable.  Turn four would be a very important one.

Here are some pictures from the first three turns:

From playing the first three turns it seems to me that the ability of the guns to concentrate their fire on one target leads to rather severe results.  I am thinking of either modifying the rules to that batteries fire singly at targets, or to have Union batteries join the battle as the game goes on.  I am sure that the next few turns will be equally revealing as to how balanced the scenario is.
Posted by Duke Winser at 5:54 PM No comments:

I am taking advantage of some time off this week to prepare for the game our wargaming club will be hosting at our convention in March.  I think I have captured the main features of the battle field.  The topography has proven to be tricky and probably off to some degree.  But I think I have the main elements.  Here are some pictures of the preliminary set up.

I am interested to see how the game plays out.  The Confederates will have an additional brigade advance behind Kershaw on the right, but other than that all of the forces are on the table.
Posted by Duke Winser at 11:25 AM No comments:

The wargaming club at the school I work at is going to put on a game at the HMGS PSW convention on March 23.  It is going to be a Regimental Fire and Fury game based on McLaws' attack on the peach orchard at Gettysburg on July 2.  Below is a map of the table.  I have really enjoyed researching this particular encounter.  I learned that it began with one of the largest artillery exchanges of the war.  I'll be hard pressed to field all of the batteries that were present on both sides!  But it should be a colorful game.  The Union had two zouave regiments play important roles in the battle, including the 73rd New York Fire Zouaves.

I hope to have at least six players for the game which will be played on a 6 foot by 4 foot table.  I have five to six of my kids from school committed to attending.  It will be great for them to experience an actual convention.  They are the future of the hobby and I hope this experience will encourage their interest. 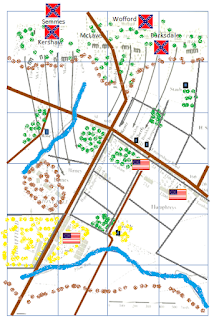 Today I was able to label all of the Confederate forces.  They are a formidable force, indeed.  Two of the brigades, Kershaw's and Barksdale's, are made up of crack troop troups.  The regiments are also fairly large in comparison to earlier battles. Several weigh in at 10 or more stands.

If you have any interest in participating in the game please let me know.

Posted by Duke Winser at 3:11 PM No comments: