I just finished three battalions of Hessian militia. The SYW page was very helpful in coming up with the uniform details. I used an assortment of odds and ends figures to make up the 20 man units. I'll finish up the bases tonight and post some pictures. Next on the agenda are a couple of regular units, some assorted cavalry squadrons and a battery of artillery.
I picked up some additional AWI figures at the hobby store last week. For my class this summer I am going to re-base my collection and add a few figures to each regiment. That should keep me busy up through the end of the school year and into the summer.
Posted by Duke Winser at 7:36 AM No comments:

Email ThisBlogThis!Share to TwitterShare to FacebookShare to Pinterest
Labels: SYW

Well, this is my third attempt at putting together this entry. I am having a hard time getting the pictures to go where I want them. When I try to move them they disappear and I have to start over. This is my last try!

I have finished my re-basing project, and so now it's time to try out the rules. Today's game had a Prussian force of three infantry and two cavalry brigades going against the same order of battle for the Austrians. The Prussians had slightly better infantry and a small numerical in cavalry. 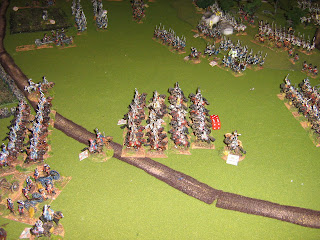 The picture at left is taken from behind the Prussian lines just prior to the start of the battle. The Prussian plan was to attack vigorously with their infantry on the left and wait to see what happened before committing their cavalry on the right. The Austrians surprised the Prussians by sending forth their cuirassiers on an assault order at the very beginning of the game. The first two turns say the adversaries come to grips with one another. The Prussians' first try to activate their hussars to stop the cuirassiers failed, but on the second bound they came through.

Austrian fire took a toll on the advancing Prussians. The 1/40th Fusiliers lost 25% from canister, but still managed to hold their ground.

On turn three a few charges took place. Prussian jagers drove back some Austrian grenzers, while an Austrian battalion stopped a Prussian counterpart cold with a first volley that claimed 25% casualties. But the biggest setback for the Prussians came when their elite hussars were soundly defeated by Austrian cuirassiers. Even worse, the men in armour rolled an 11 for their pursuit test, which means they will remain formed for the next turn and can charge a supporting regiment of dragoons that have been unformed by the retreating hussars! 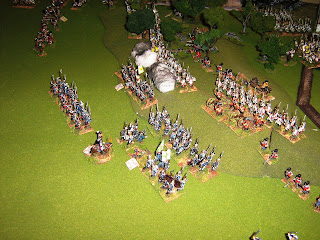 The picture at left captures the devestating volley of the Austrians into the men in blue.

Slowly but surely I think I am beginning to understand the flow of the game. It is much harder to attack than I thougt it would be. I was hesitant to use my first volley for the Prussians after moving a full turn, but in hindsight, this probably would have softened up the men in white a bit. We'll see how that works next time.
Posted by Duke Winser at 7:14 PM No comments:

Email ThisBlogThis!Share to TwitterShare to FacebookShare to Pinterest
Labels: SYW

It's a glorious day here in Southern California and it's Easter Sunday. It's a day to reflect on hope and things eternal. Today will be spent at church and with family. I have so much to be grateful for. I thought it appropriate to use this blog as an avenue to express my gratitude. I hope you have a great day as well!
Posted by Duke Winser at 7:37 AM No comments:

Finished! But not really

Today I finished my last stand of Prussian cavalry to complete my re-basing project. So I am finally done. But not really. I still have a ton of unpainted figures out in the garage, beckoning to be added to the completed legions. My plan in buying these figures was to paint them and then sell them to help pay off my Napoleonic project. I have hundreds left to fulfill this original goal, but now my mind swims with the possibilities of adding still more battalions to my SYW collection. I am already adding four more battalions of Russian line infantry. I started working on them today.

So, I have a week off for spring break and I'll need something to do to keep me out of trouble. As I write this I really have no idea what that will be, but I'll keep you posted!
Posted by Duke Winser at 8:34 PM No comments: