It has been two months since my last post. The hiatus has been due to two reasons. First and foremost, the school year started again, and along with it high school football.  Both of those have been keeping me busy. But a second contributor was that I was waiting for my hobby/guest room to be completed. I went without a work space for several weeks. But football is over and the room is finished and I am back in action.

I used some of my commission money to purchase Warlord Games Liberty or Death boxed set.  It is crammed full with a lot of goodies and I have made some progress.  I am building units for Sharp Practice. I will have more than enough figures to build just about any unit I want. I have a little over 100 of the figures painted and based along with all of the terrain pieces it came with.

By way of commentary, I think the set is a great value.  If you are looking to get into the American Revolution, this is it. The terrain pieces are a nice plus.  I also picked up the 4Ground bridge when I ordered as the shipping was free and I figured I'd always need a bridge for a variety of scenarios.

My only complaint is that the figures are not the easiest to assemble. There are several minute parts that my stubby fingers had a very hard time getting together.  For some reason, they make the bicorned heads in two pieces. I confess that I uttered more than a few curse words under my breath trying to get them assembled. But overall, I am quite pleased with how things are turning out.

Here are some pictures of my progress so far: 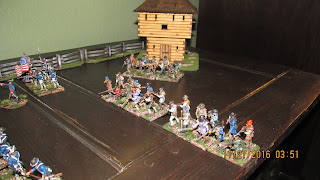 Next up will be the Hessian contingent of two musketeer groups, one of grenadiers and six jagers.
I will also have three officers, but to fill out the other groups I'll have to try to convert a few of my British into musketeers.
Posted by Duke Winser at 5:22 PM 1 comment: