Christmas Eve Battle for the Crossroads

Continuing a long held tradition of setting up a battle for Christmas time, this year I pulled out a couple of units I don't get to use much: Picton's 5th Division with the support of Ponsonby's dragoon brigade versus my Old Guard formations of infantry and cavalry.  The objective was a town and crossroads situated on a hill.  Both sides were given the task of taking and holding the town and the crossroads it sat upon.

All of the brigades were given assault orders, so everything was in motion from the start.


Both sides advanced steadily.  The British were closest to the town, and therefore had an advantage.

On turn three the two cavalry forces prepared to charge.  The French had the advantage on this flank numerically.  They also had two Old Guard Horse Artillery batteries to take on a lone British RHA battery.


As the infantry continued to advance, the two cavalry formations lunged at each other.  The British lost the first melee against half of the Guard Chasseurs and were forced to retreat.  The second British unit, however, rolled a double six against the other half of the chasseurs and routed them!  Being British, they failed their pursuit test and had to continue on into the supporting Polish Lancers of the Guard on the next turn.

On turn six both sides lit up with volleys of musketry and artillery.  The dense columns of Old Guard paid dearly for every foot they advanced.  In the follow-up cavalry battle, the dragoons pushed back the stationary lancers.  But the Scots Greys were routed by the defensive fire of the Old Guard Horse Artillery they were charging.  On the ensuing brigade morale check a double one was rolled, so the British horse were no longer in the fight for the foreseeable future.


As the cavalry battle swirled on the flank, the infantry of both sides finally came to grips with each other.  An Old Guard batallion confidently charged a conscript batallion of Hanoverians.  The defensive volley inflicted one casualty which all believed would have little effect on the outcome.  But a very poor morale roll by the French saw the assault stall and the batallion faltered.


This is where the battle left off.  In the next few turns, the French cavalry and artillery are sure to punish Kempt's brigade as it will be forced into square and have to endure the cannister of the Old Guard Horse Artillery batteries.  Two additional batteries of Old Guard Foot Artillery will also be coming into action.  It could be some very rough times for the Red Coats.
Posted by Duke Winser at 3:47 PM 2 comments:

I have been offline for too long.  Here are some shots of what I have been painting lately.  I really enjoy painting the 28mm figures.  There is so much detail and I think they turn out quite well, especially when in formation from a bit of a distance. 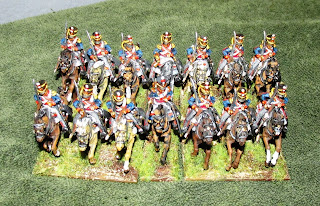 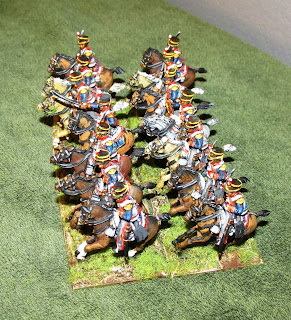 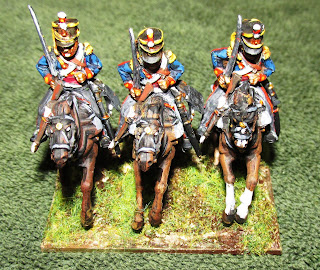 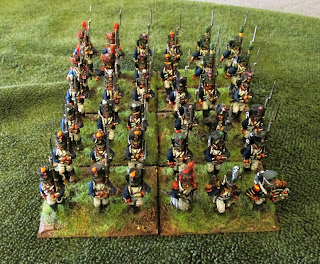 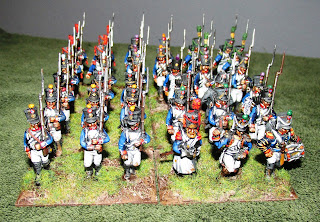 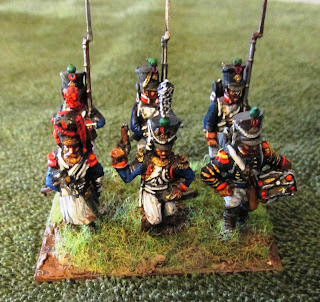