I am very pleased with the Russian hoards.  It took me a few battalions before I got the hang of the Austrians.  Taken as a whole, however, I think the overall effect is quite impressive.

My next project will be a little less ambitious; a division of Bavarians to help out the French against these two formidable foes.  But I am going to take a bit of a breather before I start on that. 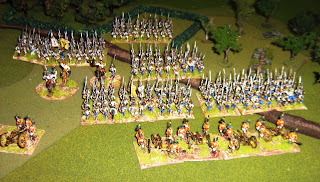 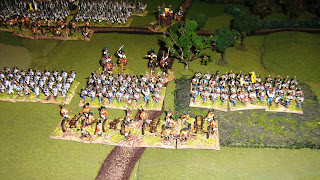 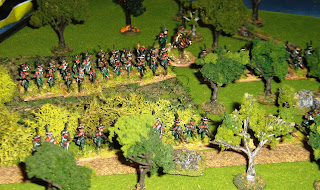 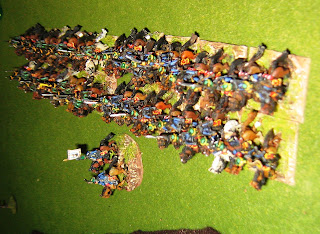 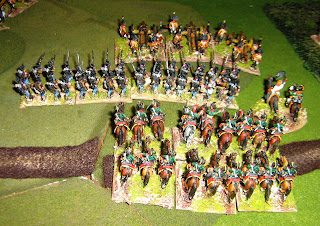 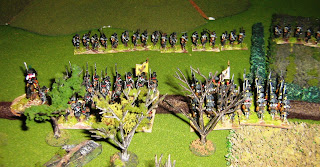 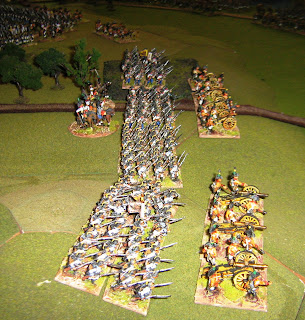 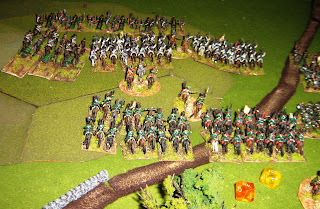 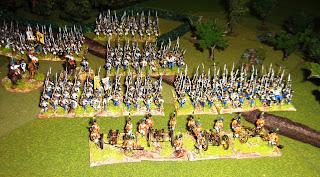 The following is an account of a fictional battle I fought awhile back using the Johnny Reb variation Johnyy Tremaine.  It was a very fun game and I thought the rules were terrific.  The main difference in this variation is the ranges, much shorter.  Therefore, the fighting is very much up close and personal; a lot of  the "white of the eyes" type of thing.  I hope you enjoy the post.

The Battle of Wheeler’s Creek

This is a fictional battle fought in 1778 in a rural valley in Eastern Pennsylvania.  George Washington is fighting a defensive battle against the bulk of the British army that is seeking to take Philadelphia.  Lord Howe is leading with Cornwallis’ division that is backed up by Knyphausen’s.  Washington has deployed two divisions of continentals and a large division of militia in two lines, with a third division of Maryland continentals in reserve.
Turn one.  The British step off.  On their right, the grenadier brigade advances steadily up a hillside, supported by Agnew’s brigade.  To the left, the British Guards attack, preceded by the light infantry brigade.  The British draw first blood with a first fire of cannon at the North Carolina brigade under General Nash.  But the Americans also inflict casualties firing canister at the British light infantry.


Turn two.  The grenadiers advance into long musket range, but both sides hold their fire.  Two American batteries limber up lest they be captured.  A battery on the far left of Washington’s line fires canister at the redcoats in bearskins and inflicts one hit.  On the British left, the guards continue to move forward, screened by the light infantry.  On their extreme left flank, the light infantry have crossed Wheeler’s Creek into a wood to engage the crack American riflemen.  Things are sure to heat up on the next turn.
Turn three.  The grenadiers surprise the continentals with a first fire volley and inflict some casualties.  The British lights get the best of the opening volleys against the riflemen.

Turn four.  This time both sides first fire, and the Brits take the worst of it.  One American unit runs low on ammunition as does a unit of British light infantry.  One battalion of grenadiers have lost 25% casualties.
Turns five and six.  The volleys continued and both sides lost heavily.  The Guards, having lost 33% of their strength, disengaged, as did the New Jersey regiments that faced them.  But behind the boiling clouds of battle smoke, the British had moved up some fresh units for a decisive push.

Turn seven.  On the British right three attacks went in.  The Americans were stubborn in their defense, but ultimately had to give ground, yielding most of the fenced road to the King’s men.  On the left, the elite light units of both sides fought a bloody mele until both battalions were forced to withdraw to regroup.
Turns eight.  The American 5th division continues to give ground and ultimately disengages across Wheeler’s Creek.  Knyphausen’s division continues to enter the table as things get ready to enter into the second phase of the game.
Turns nine and ten.  An uneasy lull settles over the battlefield as both sides regroup for the next round.  Alexander’s fifth division is no longer in fighting form and has withdrawn from the field.  On the British side, the Guards brigade is also out of the fight and the grenadier brigade will be held back in reserve.
Turn eleven.  Grey’s and Agnew’s brigades, along with the Hessian grenadiers attack across the creek.  On the British right, Knyphausen’s Hessian brigade joins in, assaulting the militia battalions dug in in the woods.  Hessian and British artillery fire, but inflict no casualties and the militia hold steady.

Turn twelve.  Things do not go well for the British.  A regiment of red coats and one of Hessian grenadiers are routed by canister fire.  A shudder seems to run down the entire line.
Turns thirteen and fourteen.  Once shaken into attack lines, the British and Hessian brigades manfully moved into the attack.  On the left, they were literally mowed down by the steady volleys of the American continentals situated behind a stonewall.  Two more battalions, one of Hessian grenadiers and one of highlanders, took to their heels.  On the right, despite appalling casualties, the Hessians managed to get a toehold into the position held by the American militia.  Now it’s time for the supports to come up and carry on the attack.
Turn fifteen.  The British assault on the American right has all but been crushed.  Four British regiments charged the stone wall and were literally wiped out by point blank volleys.  The only American casualty was the divisional commander who was killed by a random shot.

My latest project is putting together a large force of Austrians.  I have finished the artillery, 7 batteries, two battalions of Hungarian infantry, four of German, a unit of grenz, a unit of jagers, a battalion of Vienna landwehr, and a regiment of chevauleger plus four brigadier stands.  With the larger Austrian battalions, that's a lot of figures!


With school starting soon my pace will slow down considerably and I still have a lot of infantry to do plus two large regiments of hussars.  More pictures will follow as other units are ready to be placed upon the table.
Posted by Duke Winser at 3:18 PM 1 comment: