I just finished painting up Fort Wilderness from Blue Moon Miniatures.  It is a very large set with lots of buildings, more than I need really, but I had to have the gate with the large block house over it.  It's very similar to the Fort Apache gate that ignited my love of military miniatures back when I was in 1st grade.

I primed everything with black spray paint and let it all dry overnight.  I was pleasantly surprised that the set comes with all the metal walkways that are needed for the fort's walls.  I had to trim the support posts to make them fit, but it all came together pretty well.  I was able to paint everything in about five hours of work.  All I need to do now is scratch build a few ladders to make the walkways accessible.

One thing that I did that will make a difference is cut out cardboard pieces and glue them to the roofs.  This helps to keep them in place.  Otherwise, they slide around too easily.

I am very pleased with this.  It's an expensive set, but with the Old Glory Army discount it was a reasonable purchase.  This will be the center piece for my FIW skirmish game that I'll be doing with my miniatures class later this summer. 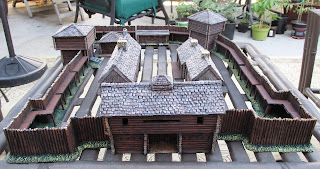 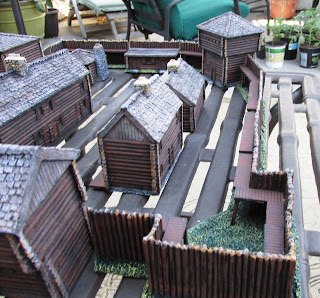 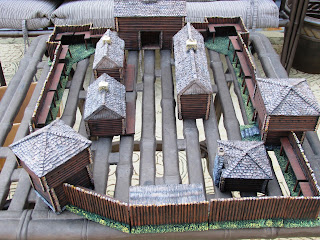 The school year is winding down and this afternoon our little wargaming club gathered for the last time.  Ten players huddled around the table for a game of Hail Caesar.  It had been awhile since we had played, but things went pretty well considering.  And just the night before an anticipated order from Blue Moon miniatures arrived with some Roman tents and Celtic huts that I was able to quickly paint up and place on the table.

Here are some pictures of the set up.


To help the game move along faster as our time was limited we used the 25mm distances even though we were playing with 15mm figures.  This turned out to be a good thing.  On the very first turn a Celtic cavalry group rolled well and got three movements.  The charge caught a Roman unit of scorpians and cohort off guard and drove them both back.  This would be a continuous fight for the rest of the game.  The Celtic cavalry was ultimately destroyed, but not before it tied down two of the Roman battle groups.

In the center, the Roman cavalry moved out to engage the Celtic infantry.  Greatly outnumbered, the horsemen were driven back.

The Roman right moved slowly and was hindered by two woodlots.  They would not be much of a factor in the game.

On the last turn, the Roman second line rolled well and was able to advance within striking distance of the village.  But the Celts rolled equally well, were able to turn a battle group of infantry onto the flank of the hearty cohorts and crush them.  Technically, the game was a draw, but the Celts had done a lot of damage to the Romans and claimed a victory without too much argument from the Roman players.

One of the students brought cookies for everyone.  He had taken a picture of the troops with his phone earlier in the week and had that used by the bakery to decorate the cookies.  The things we can do with technology these days! 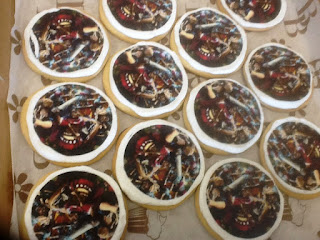 Posted by Duke Winser at 7:18 AM No comments: