This is my first battle since I retired. Ahhhhhhhh! My friends who are still teaching are really struggling with trying to do their job remotely. I can't imagine how I would have managed. This makes my involvement with my hobby all the more enjoyable.

I wanted to get my 28mm Napoleonics out on the table for a small encounter. My Berg lancers had yet to see action, so they are featured on the French left flank. They are supported by three brigades of infantry, each of four battalions. Two are allied and one is French.

The British defend Santa Liliana with two infantry brigades, one of Brits and the other of Spanish. On their right, they have two regiments of cavalry supported by a RHA battery. Two other foot batteries support the foot soldiers.

The battle begins: All three of the French brigades were given "Assault" orders. The cavalry was put on hold to await developments. All of the allied units were given "Hold" orders.
On turn one, the French and allies advanced. In the fire sequence, they drew first blood.
On turn two, things heated up as the ranges became shorter. The RHA battery ranged in on the French horse artillery and inflicted two hits. The French horse battery hit the KGL Dragoons twice. At the end of the turn, the French and allies were poised to come into contact with the enemy line. 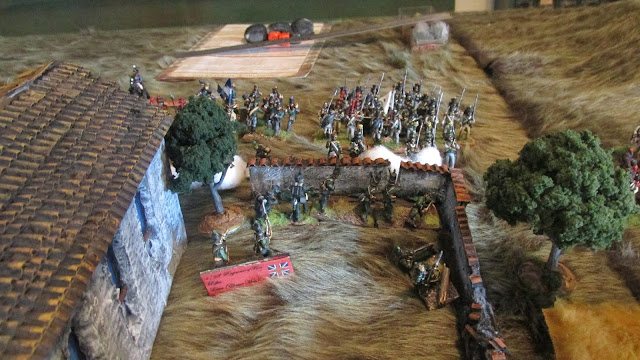 Posted by Duke Winser at 7:47 PM No comments: