Cavalry for Impetus, Greece and Gaul

I just finished basing six more units for Impetus: three Greek light cavalry and three Gallic medium cavalry. I particularly like the Gauls. I placed a final order with Victrix to round out the collection with some Numidian infantry and cavalry.

These are the Greeks. One unit has shields to represent Tarantines. 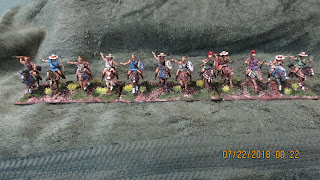 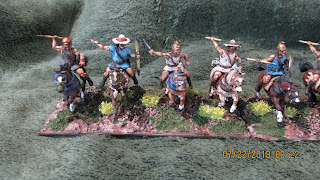 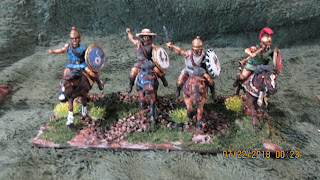 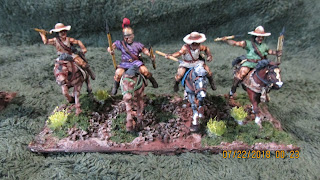 The Gauls. The shield transfers make a big difference on these. 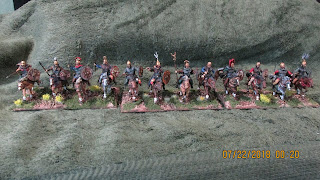 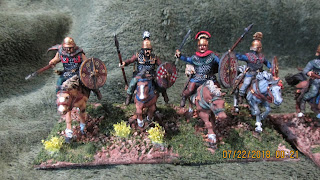 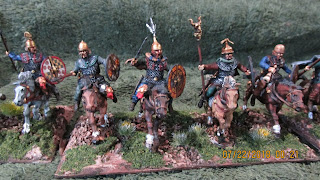 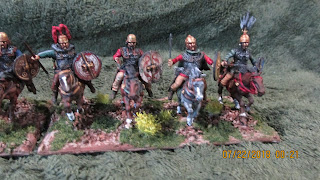 Today I hosted six fine young men for a General de Brigade game in my garage. It was an experiment that I have to say was a spectacular success. A couple of moms had sons that had taken my class in past summers. But the venue for the class ended, and I thought my ability to offer a gaming experience to youngsters had as well. But where there is a will there is a way.  I had hoped we could find a suitable location, however that would have been expensive and logistically difficult. So I took a chance by offering to have the game in my garage. The pluses were that I could set up and take down at my convenience. There would be less wear and tear on my soldiers and terrain. The only negative was that it encroached on my privacy a bit, but we only used my deck and my garage and the kids were incredibly considerate.  I believe the experiment was a success.

The set up was very similar to the one I used the previous weekend. However, with six players I needed to spread things out a bit and get more figures on the table. I brought out my entire Russian corps of two infantry divisions and a cavalry division. The deployed across the whole length of the table, with pockets of reserves in support. Attacking were allied contingents of Bavarians, Poles, Germans and a brigade of Old Guard cavalry to even things out.  Here is what happened.


The youthful inexperience of the allied players became apparent when all of their initial assaults were aimed at Russian gun positions.  Early on one of those critical events took place when a Polish lancer regiment survived the moral check after taking a blast of cannister from 6 Russian gun stands and closed with the battery. We were all certain that the battery would be defeated and the Russian center would be breached. It didn't happen. The Polish commander rolled low, and even with plus four in modifiers, lost the melee and had to retreat.  This scenario seemed to repeat itself over the next three turns.


As the game concluded it was clear that the Russians had won the day. Though their left flank was under pressure, a second line of defense had been established along a road, the town in the center was secure, and much of the Russian infantry had been unscathed.  It was a really fun game.

On a more philosophical note, several times leading up to this day I was tempted to cancel it. But one thought always sealed the deal for me. How can I justify having so many painted soldiers and scores of pieces of detailed terrain if I am not willing to get out of my comfort zone and share it all with a new generation of gamers? The fact is I just can't. The good book says that it is more blessed to give than to receive; that is particularly true in this hobby of mine. I am thrilled to know that six kids had a great experience. Some of them may even continue on in this hobby years from now. I am exhausted, but in the best way possible.
Posted by Duke Winser at 5:21 PM 3 comments:

This past Saturday I had the good fortune of playing a game of General de Brigade with a new gaming friend. He was new to the rules, but not to gaming, so he picked up the mechanics quite quickly. We were able to get through about 8 turns in four and a half hours.

The fictional scenario had a Prussian force of three divisions attacking a Russian one of two divisions. The Russians occupied a ridge and had the task of defending a small town nestled along a strategic road junction. The Prussians had a numerical advantage in infantry and a slight edge in cavalry, though the Russian cavalry was of better quality overall. Both sides had 48 guns at their disposal.

Here are some shots of the set up.


My opponent set out to attack right away rather than opt for trying to whittle down my guns prior to advancing. However, on the first turn on of his batteries rolled a double six when firing upon my horse battery. I lost a section from the battery and it had to withdraw. Right of the bat, my artillery force was reduced, at least temporarily, by a full quarter.

Then, on the next turn, my adversary rolled yet another double six when he fired at my battery sheltered in some woods on the ridge. So another battery was forced out to the line.

Despite this ominous start, the two center batteries were able to do serious damage to the advancing Prussian battalions.  Prussian cavalry advanced boldly on the Russian left flank, forcing a battalion of jagers into square.

The next couple of turns would see the Prussians continue to advance their infantry on all fronts. But the serious action centered around a major cavalry battle on the Russian left. A lone brigade of Russian cuirassiers, the elite brigade of the Russian army, charged into the Prussian light cavalry. After two turns, the Prussians were driven back and had to take a brigade morale test; they failed, and half of the Prussian cavalry fled from the field.


On the Prussian left, six battalions advance toward the ridge. A brigade of Cossacks moves forward to check their advance, but this is only a temporary delay.

The last couple of turns saw the Russian jagers drive back three battalions of Landwehr. But the engagement had taken a toll and a fresh regiment of three Prussian battalions was poised to renew the attack. Russian cavalry lurked behind the ridge ready to threaten the Prussian attack on the Prussian right flank.

Time ran out on our game and we both agreed that the result was a draw, though if we had had time to continue the Russians would have been in serious trouble on their right. A Prussian horse battery was prepared to advance beyond the flank in that sector and Prussian infantry outnumbered the Russians by a two to one margin. But, alas, we can only speculate.
Posted by Duke Winser at 10:04 AM 3 comments:

As I did with my Napoleonics, I wanted to get a record of my ancients collection. So here are some shots of all of them on the table and a link to a YouTube videol 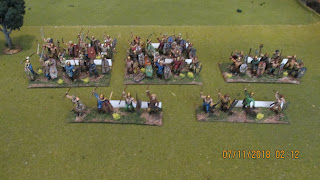 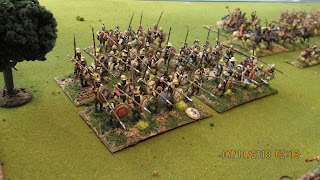