Today I launched year twelve of my military history in miniature class.  11 young men and a brave young lady turned out, which is a full compliment of students.  With the Fourth of July holiday we will only be meeting four times this week.  I pulled out all of my French and Indian War stuff and set it up last Friday.  Here's what it looked like at the outset of the game:

We use the Sharpe's Practice rules, though I have chosen not to use the "Tiffen" card.  These are kids, after all, and I want them all to stay as engaged as possible.

This year I added specific "missions" for each player.  On the British side, a wagon train needs to make its way to the fort to resupply it, Rogers' Rangers must rescue some hostages in a hostile Indian village and the Virginia State Militia, comprised of three companies, have to protect several farms and a blockhouse in the middle of the table.  As for the French, their main tasks involved doing as much damage as possible to the all too comfortable locals.

We got three turns in today.  Two farms have been burned and some farmers taken hostage.  The natives get an extra die for movement, so they have been able to hit and run fairly successfully.  They haven't done so well in attacking the fortified positions of the British on the eastern side of the fort.  These young students are learning some lessons the hard way.

We'll continue on tomorrow, and I will take more pictures.
Posted by Duke Winser at 4:07 PM No comments:

Well, as is typical of me, when I jump into a new project I go all in.  In the last two weeks I have been busy building up two forces for Flames of War.  I started with a U.S. rifle company.  Then I received the Flames of War started set and added a German infantry company, three Stugs, two Pak 40 guns, a platoon of U.S. paratroopers, six Shermans and two fireflies.  As it that weren't enough, yesterday I picked up five Panzer IVs and a couple of ruined buildings.  I also scratch built about 20 "dug in" positions that turned out better than I had hoped they would.  Here are some shots of the guys out on the table.  Now I just have to keep working at learning the rules. 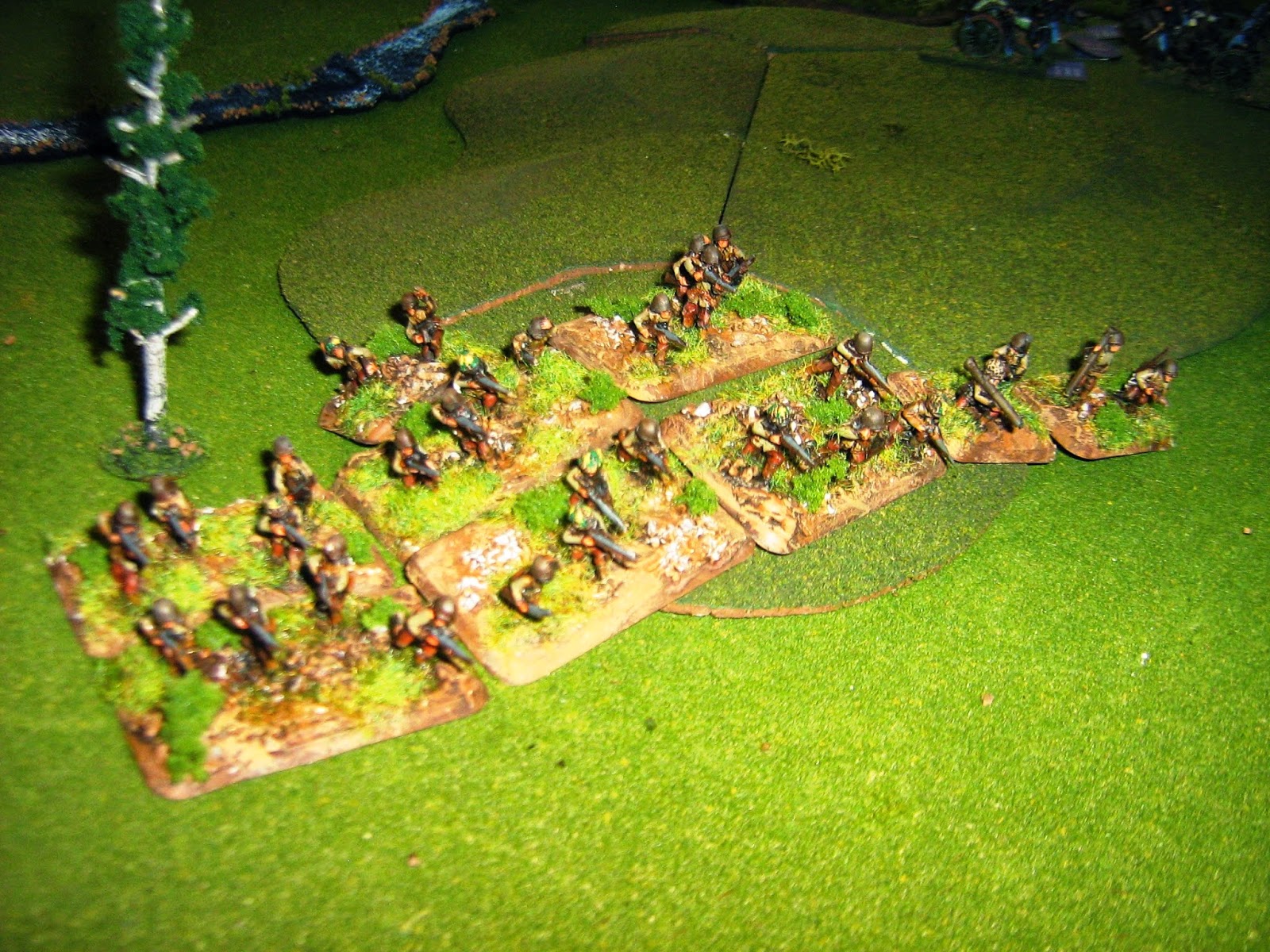 To face this force is a formidable group of Germans.


I picked up a book that will allow me to build equal forces in terms of points.  This, I am sure, will only cause me to buy more units so I have the ability to make a wider variety of forces.  But for now, I think what I have will give me enough to try many elements of the rules.  The videos online are helpful, but I need to play the situations out on my own to get a better feel for the mechanics.
Posted by Duke Winser at 4:52 PM No comments:

Our campaign continued yesterday afternoon with two battles being fought out on the table top.  The smaller of the two affairs saw a French brigade, supported by one of English pushing in an attack on Von Daun's Austrian grenadiers and a brigade of cavalry.  The Austrians only had to hold a line along a road to win, and their orders reflected this.  The French, on the other hand, were obligated to attack as they were in foreign territory.  Von Daun's grenadiers were fighting in their third action.  Despite this, they were still quite formidable.  The French had suffered a few losses in a previous battle.  The English and the Austrian cavalry were at full strength.

The English were fortunate as the cavalry were on hold orders and could not change orders throughout the game.  The red coats were able to shoot up the heavy cavalry men with negligible loss to themselves.  The French were not so lucky.  Given an assault order they marched into the withering fire of the men in bearskins and suffered accordingly.  They did manage to win a mele, but Austrian canister snuffed out the survivors.  The French brigade ultimately broke with over 50% casualties.

On the other table the much larger engagement took place.  Five Russian brigades were charged with taking a major Prussian town defended by three Prussian brigades.  While the Russians had two brigades of cavalry at the beginning of the battle, the Prussians had none and this was a deciding factor.
A brigade of Russian hussars were very successful on the left flank.  By the end of the action they had literally destroyed the Prussian infantry defending the town itself.  On the right, however, it took time to deploy into line.  And by the time the attack went in the Prussians received some much needed reinforcements in just the right place;  a brigade of heavy cavalry entered from behind the Russian right flank.
They immediately attacked and destroyed a couple of battalions before they were halted by the Russian heavies that have been in support.
It was at about this point that we had to stop the game due to time limitations.  Russian losses had been high, but they were declared the winners as they had captured the town and had inflicted substantial casualties themselves.

The next phase of our campaign plays out tomorrow.  This time the Russians will be getting their feet wet.  They advanced into contact with what appeared to be a formidable line of Prussian counters.  But three turned out to be "fake" counters.  The bluff being discovered, it is going to be a tough day for the Prussians as they are outnumbered by over two to one.  I'll have pictures to post tomorrow evening and an account of the battle to accompany them.
Posted by Duke Winser at 3:24 PM No comments:

I have decided to add yet another period to my wargaming exploits.  This is largely driven by the fact that the kids I work with at school are all very interested in this more modern era.  I was able to paint up a full company of U.S. infantry over the weekend as I await the Flames of War starter set to arrive later this week.

The infantry, at least, was pretty easy to paint.  I really enjoyed doing the bases and thought they turned out pretty well.  I am sure I'll get better as time goes on, but so far so good.