The latest addition to my Napoleonic collection is a batch of Spanish.  There are 10 battalions, two batteries and two regiments of light cavalry along with four command stands.  This is a very colorful group of units.  The variety of coat colors and uniform styles made it fun to paint up.  Here are some pictures.  I apologize for the poor quality of the photography. 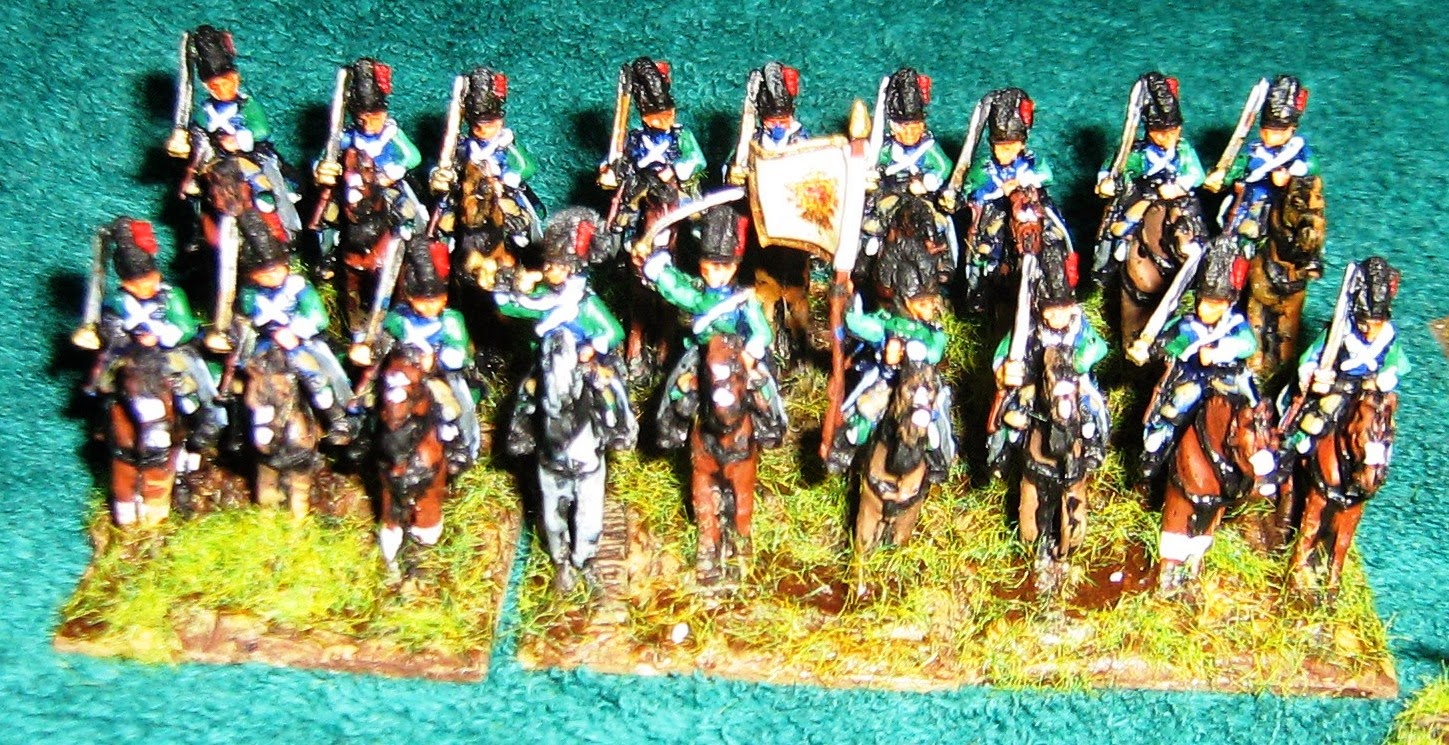 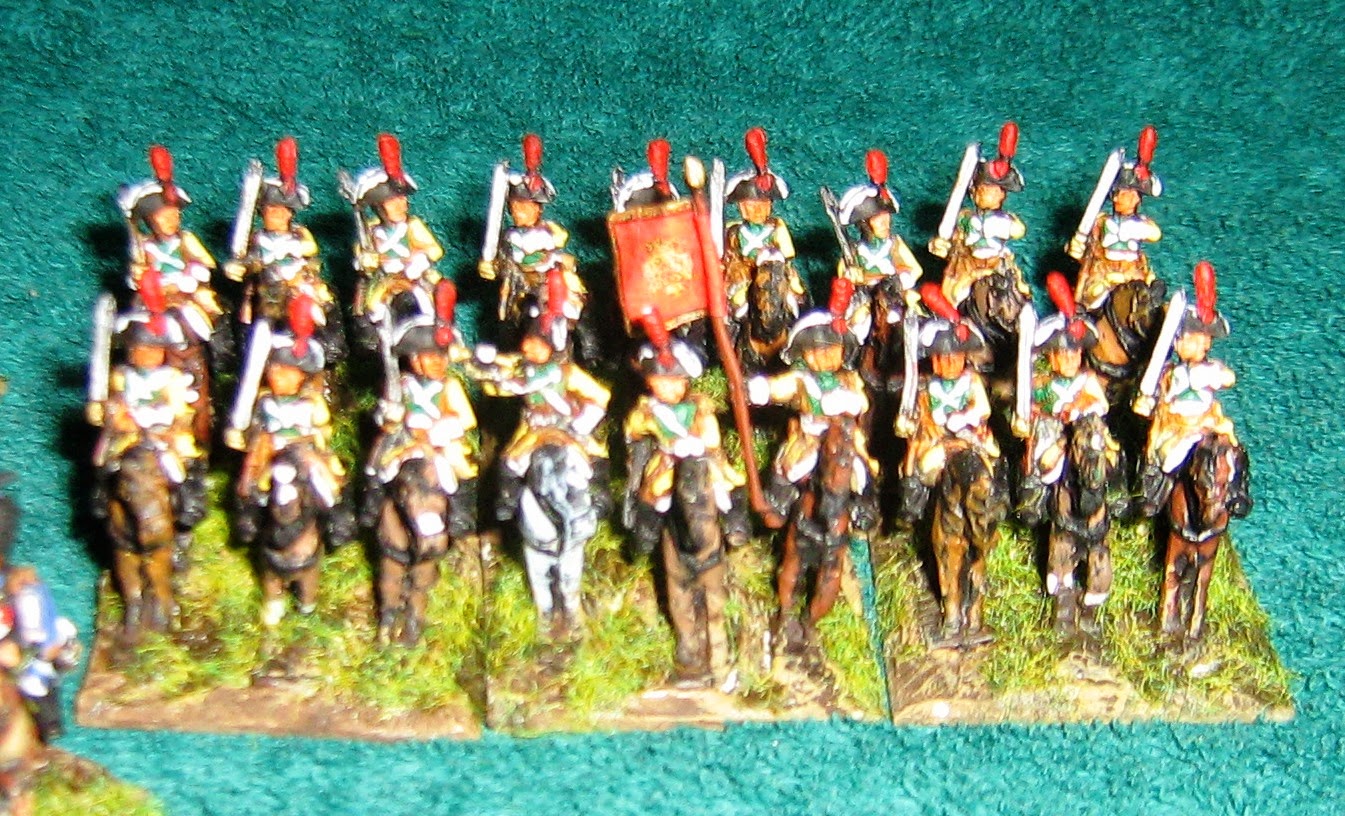 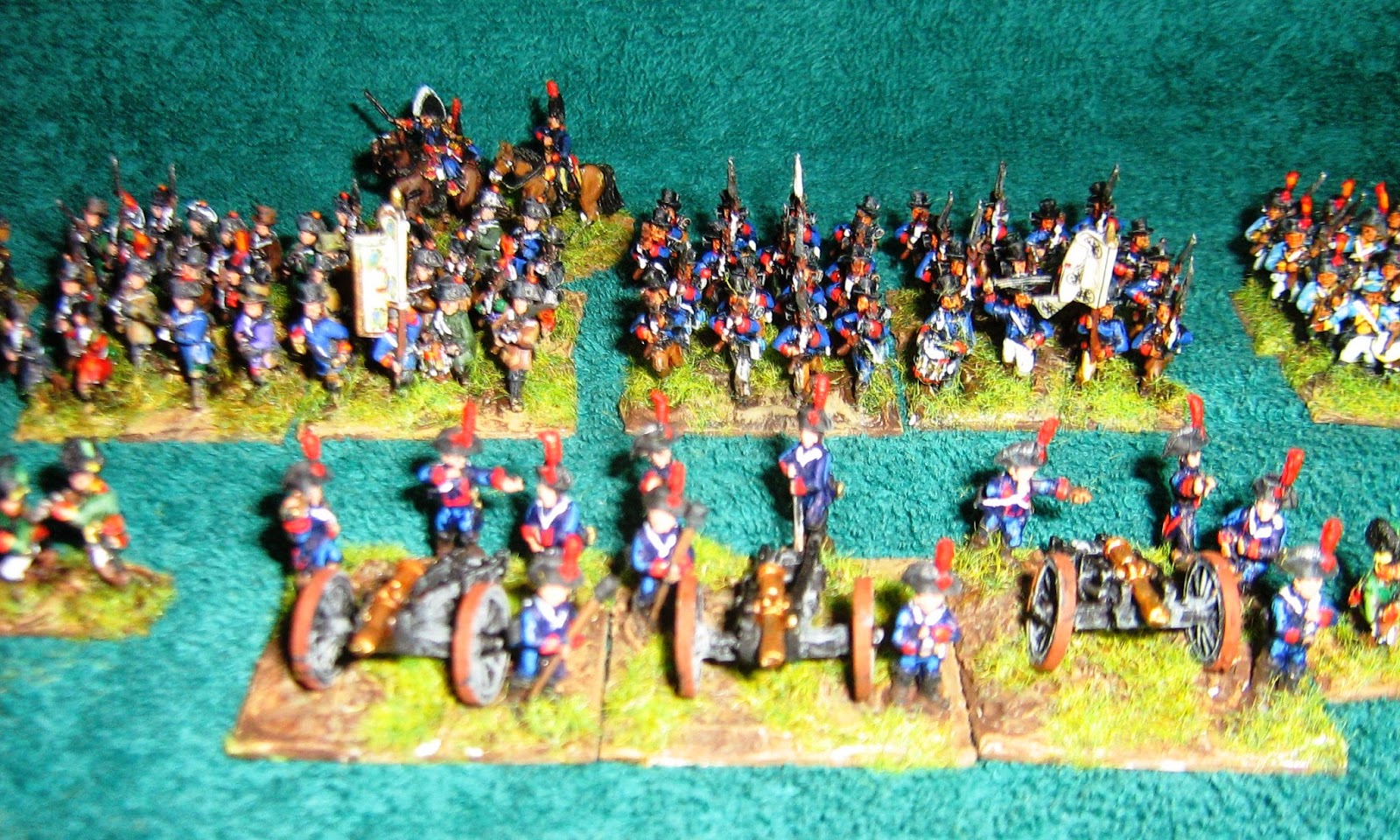 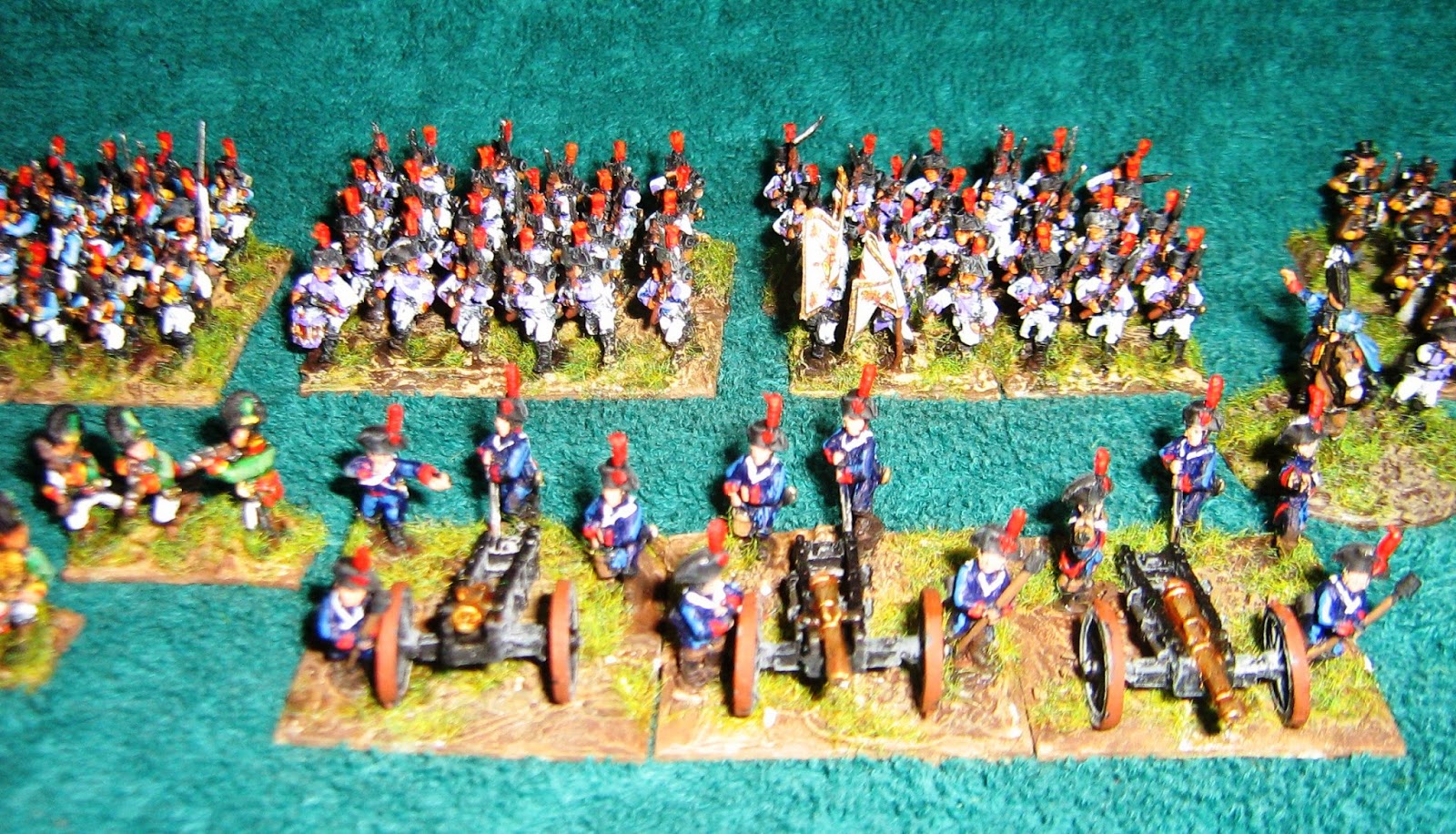 We had a half day at school today, so we took advantage of that by meeting to resolve two conflicts in our campaign.  The largest battle was a follow-up to the last encounter.  The Prussians decided to press forward into Austria, bolstered by their alliance with France.  Two blooded Austrian infantry brigades made a stand against two Prussian brigades and one Hessian.  It looked like the clear advantage was with the Prussians, but reinforcements would be entering on both sides early on in the conflict (both rolled a "1" for the turn they would enter on.)  This was to have a profound impact on the battle.

A brigade of Austrian cavalry arrived on the Prussian left flank and there were only two depleted Hessian cavalry units to counter them.  And their orders had them marching away from the threat.  Though it took a few turns to shake out into position, they did manage to completely overrun a Prussian battery and stopped the primary attack cold.  Hulsen's brigade also attacked, but met stiff resistance from Puebla's Austrians.

A French brigade came in right behind a startled Austrian grenadier brigade, but the men in bear skin caps were able to reposition themselves in time to deliver some devestating volleys into the deploying Frenchies.  A double six required a check upon the French brigadier; the result was a three.  The poor commander's horse bolted straight toward the Austrian lines and he was captured.  This left his men without a commander and  thwarted any offensive plans they may have had.

Overall, casualties were light, but it was clear that the Austrians had given the advancing Prussians a black eye.

On the other table a small action took place between an Austrian light brigade and one made up of Scottish highlander mercenaries.  The objective was a small village at a vital crossroads.  The highlander commander rejected the advice of his aged mentor (that would be me) to seize the town as quickly as possible and then hope to hold on.  Instead, this brash young commander decided to move right into a charge.  The results were predictable and bloody.  When the smoke cleared, nearly half of the kilted warriors lay crumpled on the field.   Austrian casualties were negligible.


So, it was a very good day for Austria.  The campaign aspect of the games, meaning that casualties count in future engagements, has dramatically changed the mindset of the players.  They enjoy seeing the counters on our campaign map plunked down onto a table with something tangible on the line.

Looking to the future, the Russians have been fairly cautious.  But with the bulk of Prussia's forces embroiled in the south, they may muster up the courage to make a drive on the enemy capital.  The Austrians aren't out of the woods by any means.  Their western frontier is literally wide open.  A concerted effort by the French could cause a panic in Vienna.  And crafty Hanover has formed alliances with both France and Prussia.  Should Hanover have a change of heart, things could change dramatically.
Posted by Duke Winser at 6:44 PM No comments:

The lads continue to maneuver after our first engagement. Austria and Russia have allied against Prussia. Russian forces that have ventured into Prussian territory are now headed south to join up with Austrian forces.
In the meantime, France has joined with Prussia and are mobilizing to attack Austria from the west. This should draw away some of Austria's brigades from the north.  France is also allied with Hanover. This secures France's northern border, at least, for the moment. At the same time, Hanover is at war with Prussia, so only time will tell how these political maneuvering a will pan out.
It appears that the next battles will take place along the southern border of Prussia. We have set aside The afternoon of May 16 to resolve these conflicts on the wargaming table. Interest in the campaign remains high. Stay tuned for further developments.
Posted by Duke Winser at 6:55 PM 3 comments:


This was the first battle of our SYW campaign.  Prussia is facing an onslaught of enemies as all of the other powers have united to conquer Frederick’s juggernaut.   The Russians  seemed to lose their fervor once they crossed into Prussian territory, so the first blow was delivered by the Austrians.
In an effort to seize the initiative, the Prussians threw three brigades of infantry into Austrian territory.  The Austrians responded with a better balanced three brigades, one of line infantry, one of grenadiers and one of cavalry.  The battlefield was a simple affair comprised of a major road, a couple of small farms and a scattering of fields and woods.  There was plenty of room for maneuver on our 6’ by 4’ table. 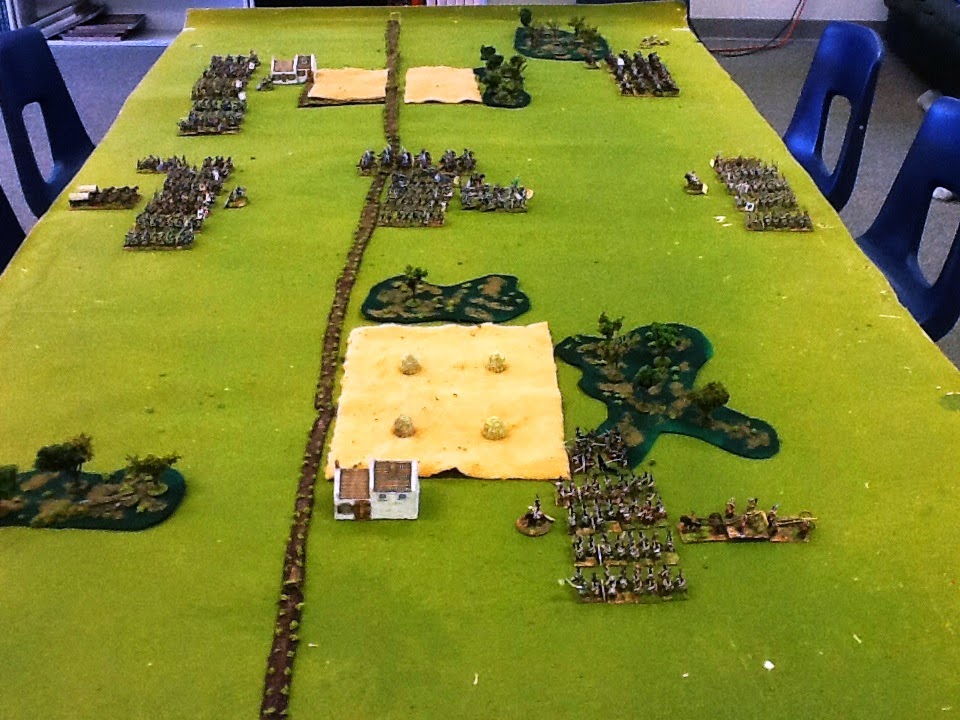 The Prussians led with a brigade of Hessian allies.  Though it was made up mostly of militia and conscripts, it did have a compliment of cavalry which proved to be of critical importance.  On the left flank was Manstein’s infantry brigade and in support was Hulsen’s brigade.
The Austrians had Puebla’s line brigade in the center, supported by Von Daun’s grenadiers on the left and Hadik’s cavalry on the right.
Both sides issued aggressive orders, so battle was joined straight away.  Hadik’s cuirassiers and hussars were ordered to assault Manstien’s battalions.  The Hessians charged ahead into the deployed lines of Puebla’s infantry while Von Daun’s grenadiers attempted to move around the Prussian flank.  Hulsen was able to change his brigades order and move to ward off this threat.
The Hessians were roughly handled by Puebla’s steady infantrymen.  Two battalions of Hessian landwehr were ripped apart by thunderous volleys and waves of canister.  But as the battle was drawing to a close, a regiment of Hessian dragoons managed to endure a blast of grapeshot and close with the Austrian guns.  They won the mele and then, on the pursuit test, rolled low so as to have to continue the charge.  This was indeed a blessing as Puebla’s flank was wide open.  In the following turn a battalion was caught in the flank and obliterated before the dragoons headed back to their own lines to reform.

Hadik’s cavalry attempted to charge Manstein’s men,  but the overall results were dismal.  Though one Prussian battalion was destroyed, the other charges saw very high rolls empty over half of the saddles of the brave cuirassiers, throwing them back in defeat.

The battle between Von Daun and Hulsen was a stalemate, though the greater number of casualties were inflicted by the grenadiers.  The Prussians outnumbered the Austrians, but deployed poorly and weren’t able to take advantage of their numerical superiority.
In the end, it was clearly a Prussian tactical victory, but a strategic victory for the Austrians.  Another brigade of Austrian cavalry was close at hand, so the Prussians would not be able to follow up their victory.
It was a very fun game.  The fact that it took place within the context of a campaign added a degree of realism that had been missing from our previous games.  Generally, casualties were moderate, but Hadik lost half of his cuirassiers and this will surely be felt when the Prussian cavalry is confronted down the road.
Posted by Duke Winser at 7:03 PM 5 comments: