Our battle went off without a hitch this morning. Our gathering was really all that a wargame should be; friendly competition played out amidst conversations about history and current events. This is why we game!

I am still learning how to set up games featuring 28mm figures. I love the visual aspect, but the logistics are quite confining on a 6 foot by 4 foot table. Be that as it may, the scenario played out fairly well and could have gone either way.  In the contest post mortem, it was agreed that the turning point of the battle was a cavalry charge that the British won by three points. This set in motion a series of events that resulted in the entire right French flank literally melting away. Brigade morale tests can be game changers in these rules.

Here are some pictures and a brief narrative. 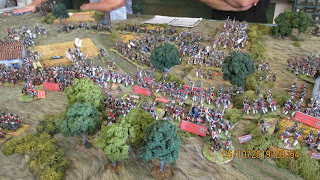 I declared this a British victory. The lads, however, were not willing to yield to this decision. They pointed out that the road junction was still very much up for grabs, and that many units on both sides had yet to fire a shot. You have to love young people.
Posted by Duke Winser at 3:05 PM 2 comments:

It has been far tool long since my last post, but I am back in the saddle with a game coming up in a week. It is pretty much set up using my 28mm collection. Here is how it looks.

An Anglo-Spanish force of four brigades are tasked with holding an important road junction. Their four brigades will have a stiff challenge in carrying out their mission against the numerically superior French. The Francs, on the other hand, must drive the allied brigades off the table in order to secure a victory. They will start with three brigades and three batteries to begin with, and will have a fourth brigade come on later in the game.