On my first full day of vacation I was able to get three more turns in on my battle for Shepherdsville. On turn four reinforcements arrived for both sides. The rebels received three batteries of artillery while the Union brought up a second brigade of cavalry. Whiting remained quite aggressive, charging the 1st SC yet again.  This time his two depleted regiments were able to drive off the men from the Palmetto state, however their victory was short lived as they were counter-attacked by the 1st North Carolina. Both units lost two stands and were broken in the process.

Both sides used turn five to reorganize and to bring up their reinforcements. The only action, to speak of, was the charge of Hampton's Legion across a stubble field against two regiments of dismounted Yankees. The rebel horsemen were able to drive the troopers back, but didn't inflict any casualties. They fell back to their starting point disordered.

On turn six one rebel battery came into play, but its fire was ineffective. Whiting's men regrouped on the Union right, ready to stand against the 1st North Carolina if necessary. One of Davis's regiments extended the Union firing line to the left by dismounting there.  Buford's troopers have been stopped cold in their attempt to take the town. And the task will be even harder now that rebel artillery has unlimbered on the high ground.

Here is a link to a Youtube video I posted of the action up to this point:

Youtube Link
Posted by Duke Winser at 2:45 PM No comments:

At long last my summer vacation has arrived. Normally, I would be preparing for my miniatures class, but this year the camp I participated in did some downsizing; my class was cut despite always having good numbers. I looked into an alternative venue, but after considering the extra work that would be involved, I decided to take a break. However, I haven't lost my desire to put my figures to use, so I plan to have several solo games to quench my hankerings.

My first undertaking will see my new ACW cavalry stands put into action. I thought I had added a significant number that would allow me to recreate some really big cavalry engagements. I was wrong. Confederate regiments tended to be 400 or more men. That is ten stands in RFF accounting. Regardless, I still have a lot of guys to push around.

The Battle of Sherpherdsville is fictional. It is set in the northern Shenandoah Valley later in the war. Shepherdsville is an important agricultural center for the rebels and the Union high command has ordered a cavalry raid to try to eliminate it as a source of supply for the starving armies of the South. A division of three brigades plus supporting artillery has been assigned the task. Two large Confederate brigades, also with supporting artillery, are racing to counter this move.

Dice have been rolled to determine when the opposing units will arrive. As fate would have it, both sides will enter the table at the same time and then roll on successive turns to see if reinforcements arrive.  The rebs' entry point is closer to Shepherdsvulle, giving the men in gray an advantage. Hampton rolls well for his movement, and on turn one his lead regiment, the 2nd South Carolina advances to the northern end of the town. From this vantage point, Hampton immediately sees a long blue column of horsemen just a couple of hundred yards away. In the next two turns, the 2nd SC wins two successive charges, driving Whiting's Yankees back while buying time for the rest of Hampton's brigade to extend their line east and west of the town. The initial numbers certainly favor the men in gray. 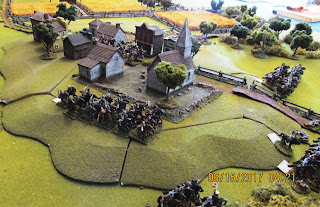 As turn three ends, both sides are anticipating reinforcements, but are not sure of what they will be. The question at this point is whether or not Whiting's men can hold on long enough to their position south of the bridge to keep the road open for those reinforcements to arrive.
Posted by Duke Winser at 9:39 PM 1 comment:

I have been working on some odds and ends and thought it was about time to post some images of    some completed items. Today's offering is some shots of the Warlord Games ambulance I picked up to add a little something unique to my collection. 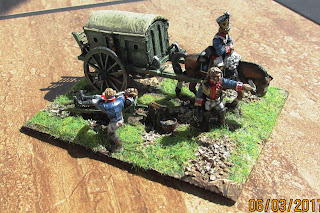 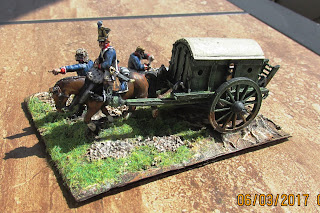 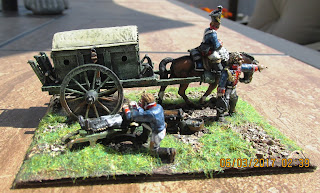 This set comes with some nice features and was easy to put together. I think vehicles add a lot to a wargaming table.
Posted by Duke Winser at 3:50 PM 2 comments: