The idea of a campaign has floated around my head for years. In the past, attempts have been disappointing, to say the least. But I can't think of a better way to really capture the spirit of a period and generate realistic table top battles.  The key to success, in my mind, is to keep the scale small enough that battles come quickly and to keep the mechanics simple.

The first thing I have done is generate a map.  Five nations will be involved. The three largest will be Austria, Prussia, and Russia.  Each will control a quarter of the map and will have a capital, five major cities and ten villages connected by a series of roads that will be used to move armies.  Hanover and France will also take part, dividing the fourth quarter between them. They will each have a capital, three cities and five villages.

I have made counters to represent all of the brigades I have available for each country.  The Prussians have the largest force with 14 brigades, the Austrians and Russians have 12, the French and Hanoverians have eight. The major powers have two supply trains each while the minor states have one.  Each county has a diplomat who can travel to neighboring capitals to negotiate treaties. And then to add some "fog of war," each nation will have a number of dummy counters that will only be discovered when contacted by an opposing "real" counter.

Battles will be eight turns.  As the game master, I will determine a winner.  Winners will get back 50% of its losses, losers only 33%. Units can be brought back to full strength by returning to their capital and spending two turns there.  It looks like will have about eight players.  I'll keep the game map in my room at school and we will use our weekly meetings to plot out strategic moves and then fight battles after school as frequently as possible.

The plan is to start this Wednesday and see what happens.  I am guardedly optimistic. Battles should occur quickly, but the forces involved will be small enough to make them move along quickly.   Because it is a campaign, the sides will seldom be even,  and the "to the last man" mentality will prove to be foolhardy.

Stay tuned for reports and updates.

Posted by Duke Winser at 9:29 PM No comments:

I finally finished up the last of my large commission of Front Rank Bavarians.  My client allowed me to take a couple shots of the finished infantry, over 300 figures.  The pictures didn't turn out as well as I had hoped, but they'll at least give you an idea of the amount of figures painted.  He added the flags and based them.  Quite impressive. They will see their first action this Saturday.  I am anxious to get a report on how the hold up.

These were truly a joy to paint.  I was afraid it might get a little monotonous, but he passed on one division at a time and it went quite quickly.  There were four different facing colors, red, black, pink and yellow, plus a variety of colors for the linings on the lapels and collars.
Posted by Duke Winser at 6:41 PM No comments:

John Ray is an Englishman that has taken the art of wargaming to the out limits of awe and wonder.  I had seen photos of the miniatures that he had sculpted and painted, both inspired and demoralized by them.  Then, last spring, I read that he was going to publish a book containing pictures of his unbelievable collection.
Fast forward a year later, and through a really terrific turn of events including several emails with the author himself, I am now the proud owner of a copy of this limited edition.  It is a treasure!  And along with the purchase, I am now eligible to join a private forum he has developed that will follow various campaigns involving his lovely miniatures.  John Ray is truly a military gentleman if ever there was one.

Below is a link to the web site that will provide a link for purchasing the book.  It is amazing.  And if you should choose to buy one for yourself, please tell him that Everett referred you to him.  Thanks!

http://www.amilitarygentlemanofthe18thcentury.co.uk/
Posted by Duke Winser at 7:15 PM No comments:

A few students joined me after school today to reenact the brave stand at Roark's Drift.  I had purchased the 15mm boxed set from Old Glory quite awhile back and have never actually played a game with it, so today was the day.  We tried to use Battles for Empire, and while it allowed us to play the game with a couple of adjustments, this is more of a skirmish game than that set of rules supports.  Be that as it may, two British players squared off against three Zulu commanders and we were off.

The Zulus began in a big clump at one end of the table.  There were 27 units of four stands each broken down into seven different commands.  The defenders had 20 stands of three men each to start with, but it became apparent that there were far too many men so I subtracted six of the stands, much to the dismay of the colonial commanders.  It made for a much better game, however.

The Zulu strategy was to attack head on with the "chest" of their formation and then surround the remainder of the compound with their "horns."  This worked rather well.  The Brits massed their few figures against the first attack and then were hard pressed to maneuver them to other parts of the perimeter as the battle progressed.  They moves more slowly than the Zulu to begin with, and then suffered an additional penalty when they tried to traverse the interior lines they constructed with biscuit boxes and mealie bags.

Although the Zulu masses suffered massive casualties, their superior numbers proved decisive at a couple of point and the defenses were breached.  Once that happened, the battle was pretty much over.

Here are a few pictures: 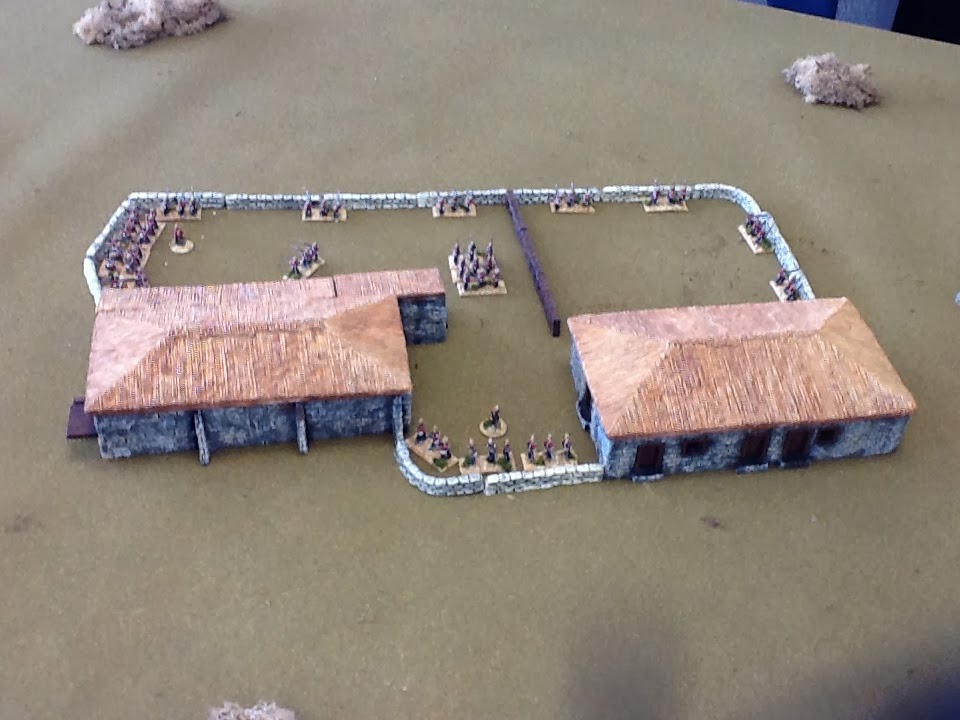 It has been my good fortune to be able to pick up a couple of commissions in 2014.  The first was some AWI cavalry and light infantry.  These were 18mm Blue Moon miniatures.  The client did the basing, which in my opinion is excellent.  Here are some pictures he was kind enough to send to me. 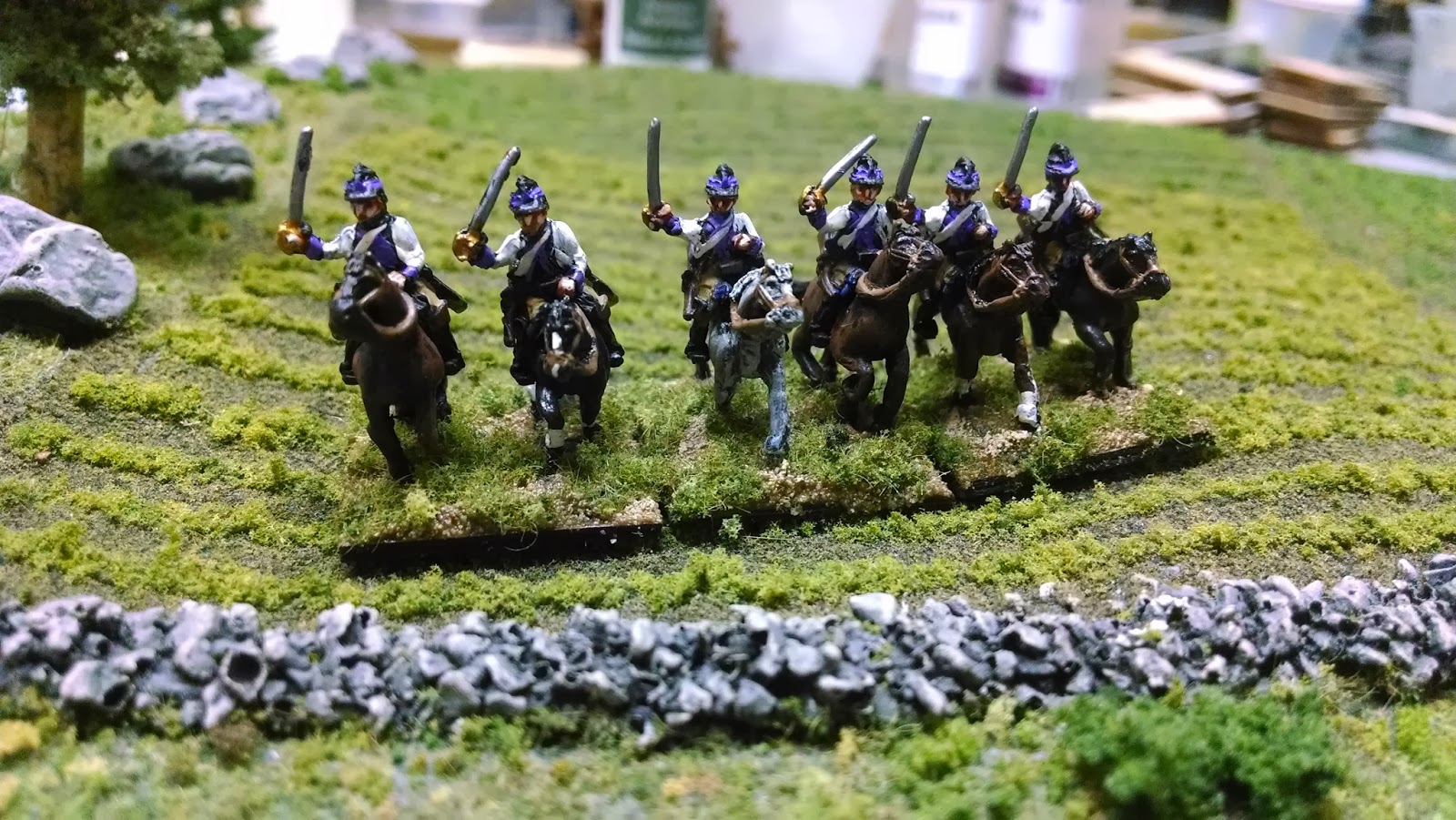 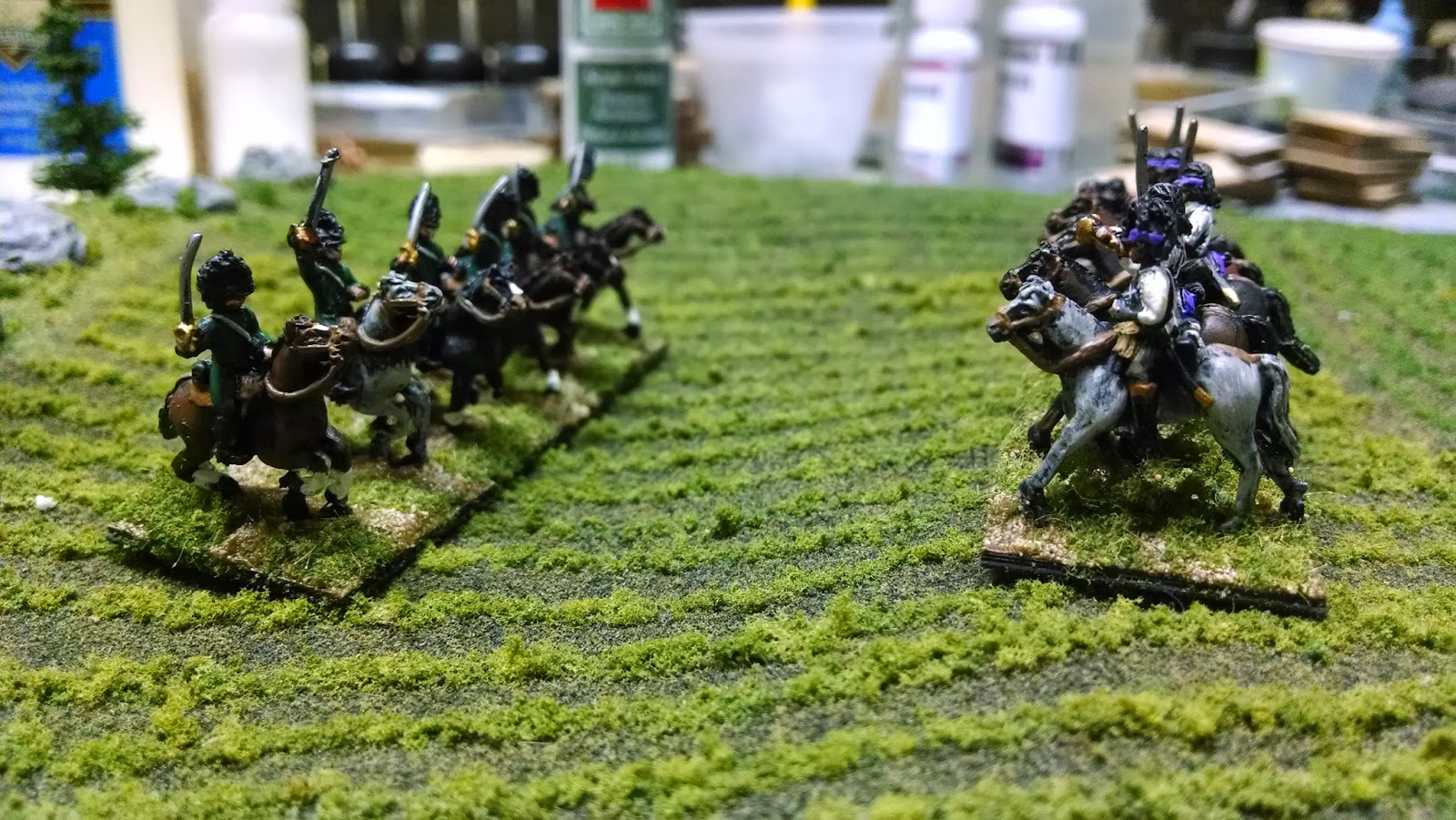 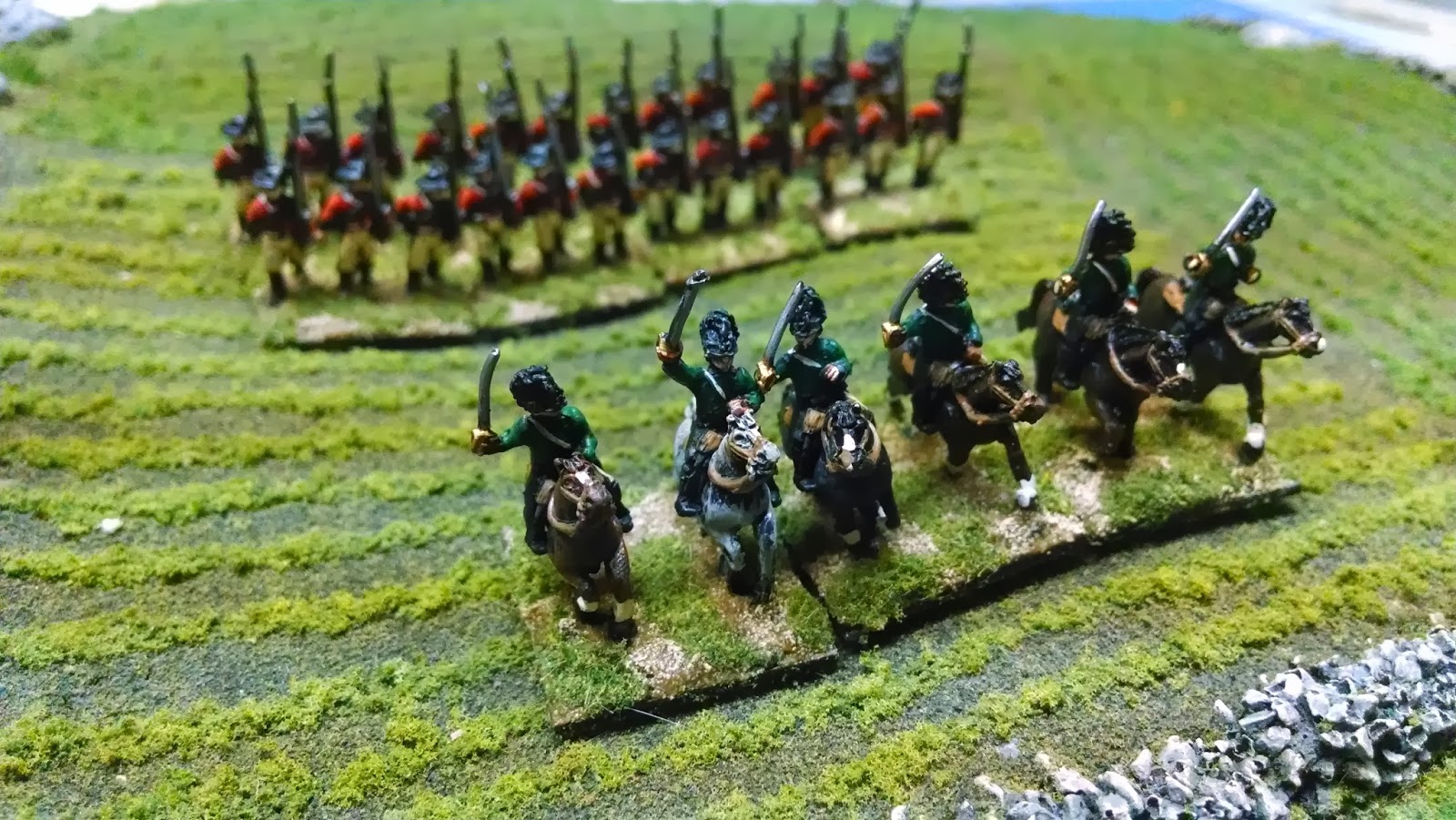 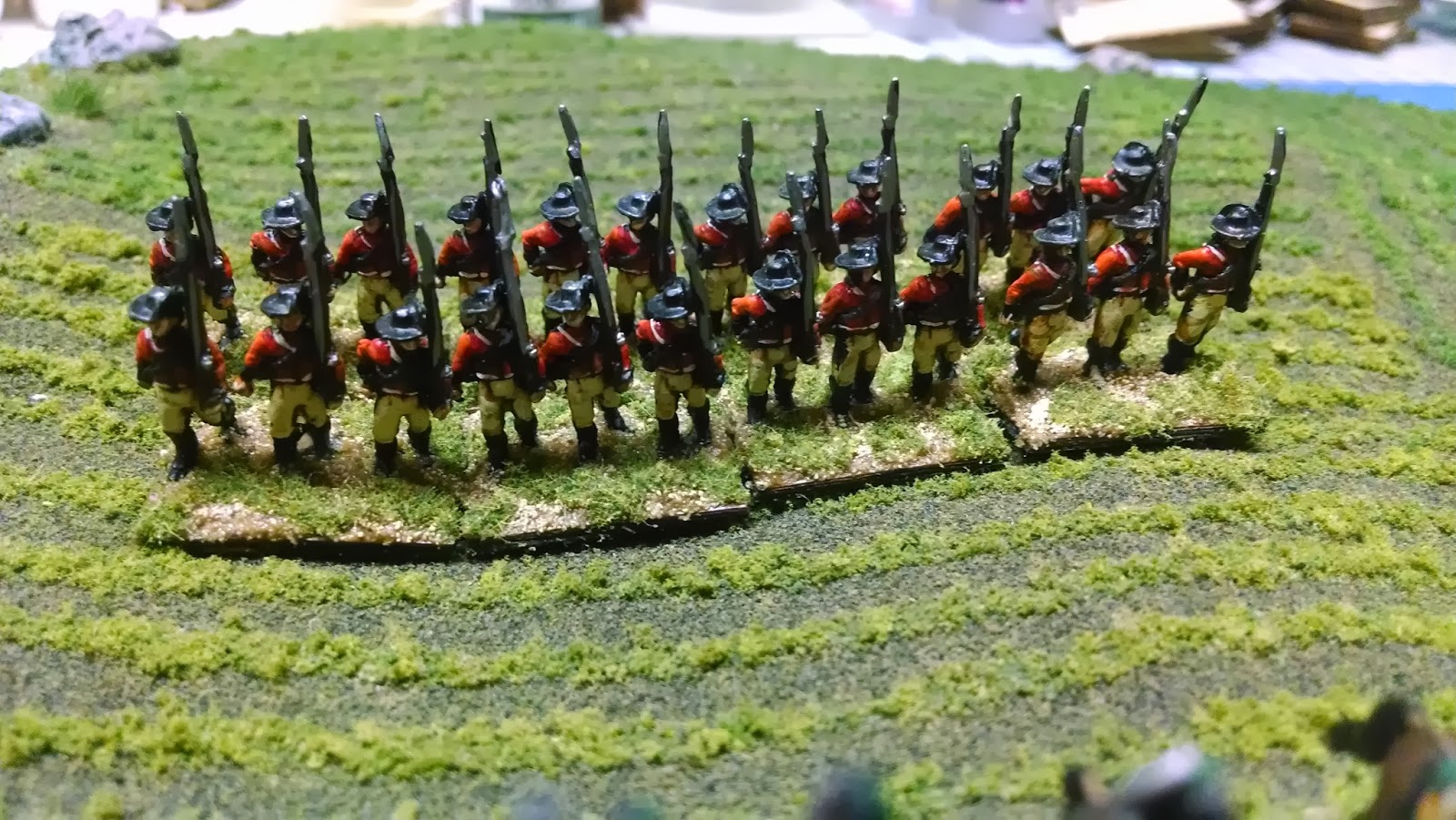 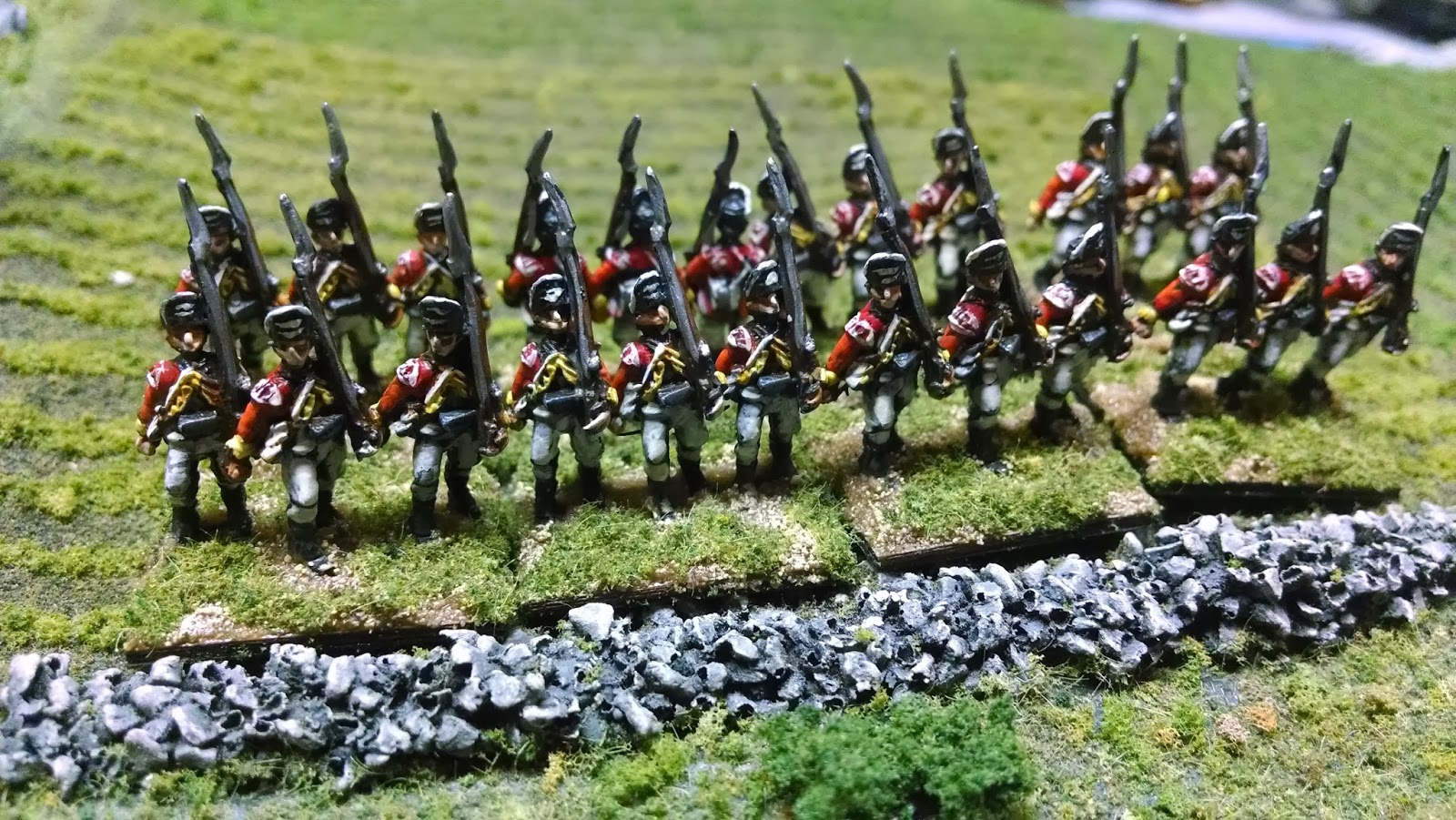 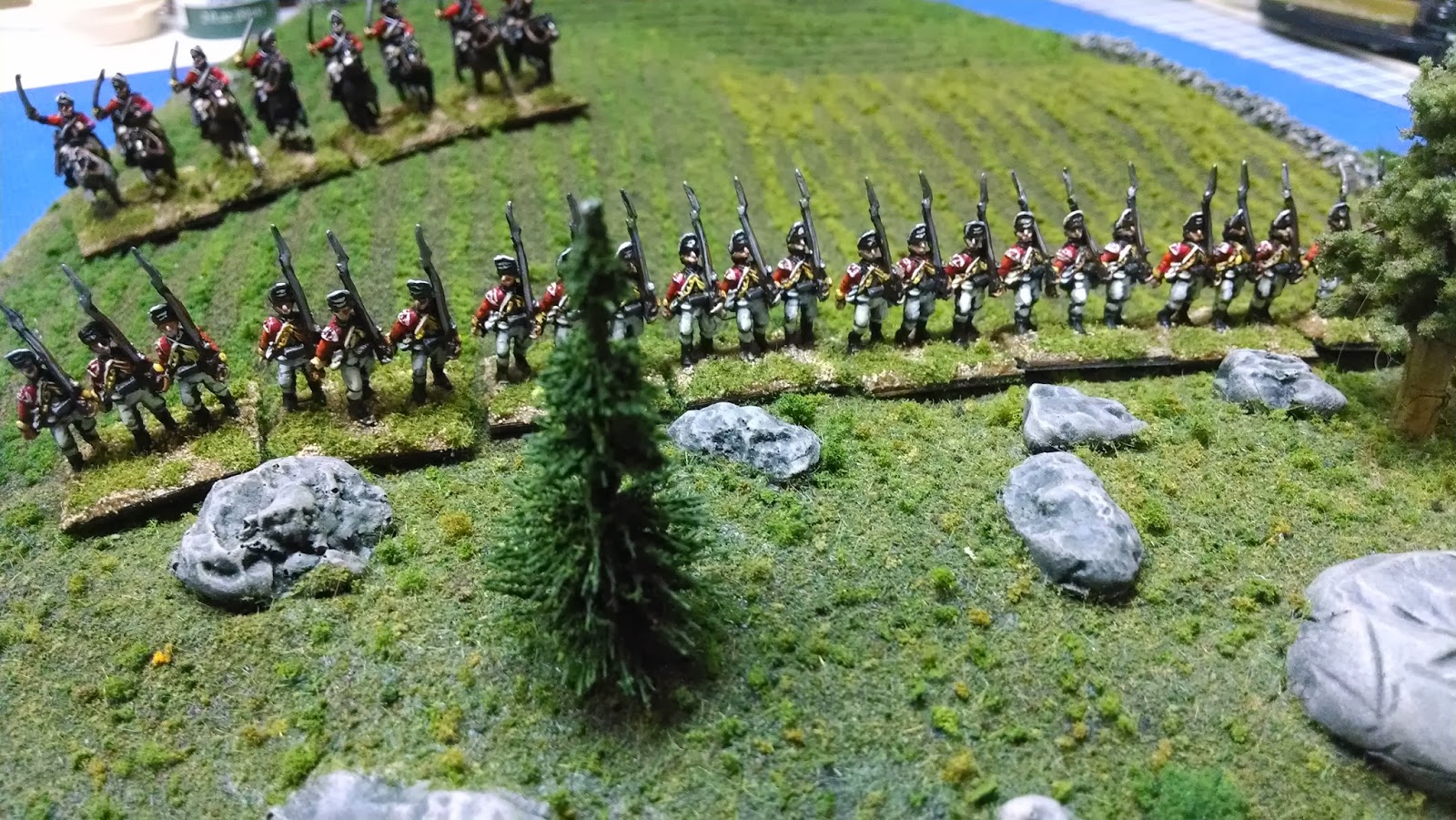 The other project was quite ambitious and still not finished.  To date I have painted up over 300 infantry figures, the vast majority being made by Front Rank.  These are beautiful miniatures and a joy to paint.  The detail is excellent.  Here are just a couple of shots to give an idea of how they have turned out.

I have been able to finish 90 figures in a week's time.  The client is doing the basing in his unique style.  He says it takes longer for him to base them than it does for me to paint them!