I was sent a nice group of 26 Minden Miniatures to paint up as the 17th Foot from the Seven Years War.  The figures are very nice, though I would have liked to have more detail on the faces to work with.  But the other details were excellent.  Here are a couple of shots. 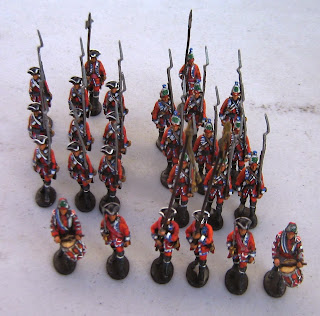 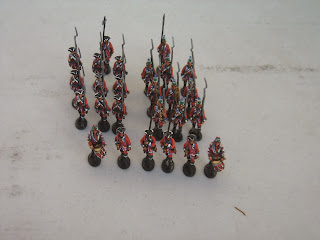 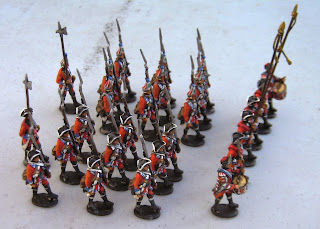 Posted by Duke Winser at 3:27 PM No comments:

It doesn't seem very Christmassy here in Southern California today.  It's in the mid 70s and downright hot out in the sun. Be that as it may, it is still a joyous time of year. I am thankful to God of this many blessings: good health, abundant provision and a loving family.
Most of my hobby time of late has been devoted to painting for others.  I enjoy this and hope to add other commissions in the year to come.  It seems one man's pain is another man's pleasure.
I wish all of you who have visited my blog over the years a wonderful New Year.  I am close to 25,000 views.  Perhaps by the end of the year!

Despite the crush of the holidays, I opted to put on a game of Regimental Fire and Fury for a few of my students.  The battle was a fictional affair that takes place in the fall of 1862.  Abner Doubleday's division has been given the task of securing passage over a bridge held by D.H. Hill's Confederates.  The Yankees held a numerical advantage, four brigades versus three, and surpassed the men in butternut in artillery as well, nine guns to six.

The Union players were aggressive, knowing that they only had a little time (two and a half hours of game time) to secure their objective.  There were two player marshaling the forces of the northern cause.  One took Phelps's and Gibbons' brigades plus a battery to attack the rebel right flank.  The other commander pressed on with Patrick's brigade and Hoffman's in support to engage the Confederate left.

The first blood was drawn by the skirmishers of Phelps' brigade as they pressed in on Ripley's unit.  The young brigadier playing the part of Ripley responded with vigor.  In the end, it proved to be excessive.  Skirmish lines blazed away and a considerable number of 10s were rolled, meaning that units ran low on ammunition quickly.  Rolls were taken to see if commanders were hit, but the good Lord seemed to be watching over them this day as bullets continually missed their mark.

Ripley's men were itching for a fight, so they charged out from their hasty works.  One unit was stopped cold by intense musketry and another didn't roll high enough to close with a battery of Union artillery.  Over the next two turns both of these regiments were torn to pieces by concentrated rifle and cannon fire.  To make matters worse, Gibbons' elite brigade came up to add its strength.  By the end of the game, Ripley's regiments were all spent and having to fall back.  The one bright spot came when a regiment of zouaves attempted a charge and ended up being broken due to a very unlucky dice roll.  Other than that, the rebel right flank was pretty much destroyed.

On the other flank, Collquit's brigade also decided to charge as opposed to being decimated by cannon fire and musketry.  Most of the units were armed with smooth bore muskets, and so they were at a disadvantage in a firefight.  Collquit's charge drove back Patrick's brigade, but in the meantime, Hoffaman's men were able to form a second line supported by a battery of artillery.  As the game ended, the rebs inflicted losses on the yanks, but were in turn battered themselves.

Anderson's brigade stayed put in positions near the bridge.  Though they hadn't suffered any casualties, they would have been hard pressed to hold out against two fresh, veteran Union brigades.  Additionally, despite being on the defensive, the rebels lost many more men than the attacking yankees did.  The young Confederate commander's aggressiveness had a large price tag.

I have painted up another French battalion of 30 figures to accompany the Swiss battalion already painted.  Only one of the shots that I took without flash turned out fairly decent.  Here it is. 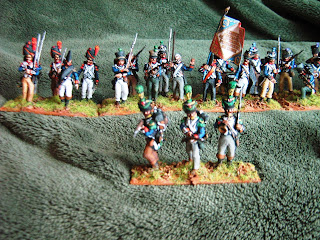