I will close this chapter with a final post.  Old Glory 15s did the right thing by comping me some figures to make up for the previous three orders that were short figures.  They did an excellent job of getting me my missing figures and the comped figures to me in a timely fashion.  But, God bless them, one of the comped figure bags was missing a figure.  I appreciate all that they did for me, but the problem is still not fixed.  I know they mean well, but their system is dysfunctional.  How hard is it to count to 48?  They aren't able to do it.  They mean well. They are trying hard.  But in my world, trying hard isn't enough.  The proof is in the pudding.  Old Glory 15s just don't have their act together.   It's a shame, because they have a great range of figures.  But there are other options in this great hobby of ours, and I will be calling on them to meet my hobby needs from now on.  Service matters.
Posted by Duke Winser at 4:33 PM No comments:

I believe that it is important to be fair and not to hold grudges.  In that spirit, I want to report that the folks at Old Glory 15s contacted me on Monday admitting that they had made an error on the mailing label.  The result was that the package they had promised was returned to them.  An apology was offered along with a gesture to make things right.

Old Glory 15s could have just ignored me.  They didn't.  Instead, they did all I could reasonably expect to try to make things right, and even went beyond that.  I felt I needed to acknowledge that publicly.
Posted by Duke Winser at 12:22 PM 1 comment:

I am done with Old Glory 15s

I am not a complainer. I do whatever it takes to maintain my loyalties, but I believe loyalty must be a two way street.  For 25 years Old Glory 15s have been my figures of choice. I have spent literally thousands of dollars on them over the years, but my last three orders were missing a considerable number of figures.  Repeated emails were either not returned or met with some pretty flimsy excuses. The bottom line is that they have not corrected these mistakes after repeated requests and so I have decided to take my business elsewhere and I am encouraging everyone I know to do the same.  Here is my latest and last email to Old Glory 15s:

I posted a comment on TMP about how dissatisfied I was with your lack of follow through on what I thought were legitimate complaints about your service. I was stunned to see a follow-up that claimed you tried to send me the missing pieces I had notified you about.   I don't believe this is the case at all.   If it were, why didn't you contact me via email which you have on file?

I will no longer do business with you and I am steering my students who constantly ask me where to obtain figures away from you.  I was once a very loyal customer, but you failed me time and again. Enough is enough.  I am not alone in my opinion as is apparent from the number of responses I had on my TMP post. (End)

From here on out I will be purchasing Blue Moon figures. Change does not come easily to me, but in this case, it's long overdue.

I am through with my rant. When my first order of Blue Moon Napoleonics arrives I will be sure to post pictures of the painted figures.
Posted by Duke Winser at 8:40 PM 2 comments:

My marathon painting session with 282 40k figures is done!  I have to say, I enjoyed the project much more than I thought I would.  The detail on the figures was excellent and the variety of colors was fun.  I improved on my ability to shade using dry-brushing.  Apparently, this client has more for me to do, so I'll able to put my new skills to further work.  Here are some shots of the other types I did.

I am working on a large commission of 40k figures.  What an education this has been.  It's all very strange to me, but the figures have lots of detail and since they are fictional, it leaves a lot of room for imagination.  But it has also confirmed the fact that I am definitely a historical wargamer. 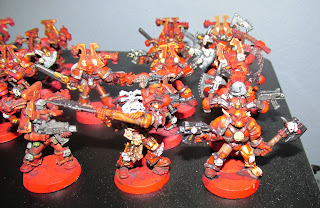 Posted by Duke Winser at 9:47 AM No comments:

Yesterday our little wargaming group switched genres and traveled back to the 1870s as Her Majesty's army took on the Zulu hordes.  3 players commanded six companies of British soldiers and five others led the Zulu host into battle.

The objective was for the British column to make its way to the end of the table.  The Zulus, on the other hand, were to stop them.  It had been quite a long time since we have played these rules so we were rusty.  I made the mistake of starting the opponents too far apart in light of the limited amount of time we had to play.  Nevertheless, the kids seemed to enjoy themselves and the game ended in a stirring charge that nearly turned the tide in the Zulus' favor.

The Zulus suffered terribly for their heroics; the British column didn't make it even half way across the table.  Therefore, the game was determined to be a draw, though both sides departed fervently believing that they had gotten the better of their opponent.