As 7:00 chimes in the Union cavalry is poised to make assaults on both flanks.  In the south, Smith's men charge through the woods at the thinly deployed lines of McMichaels's two dismounted regiments.  A hail of fire greets the blue clad cavalrymen and brings them to a sudden halt.  Smith can see rebel infantry coming up fast behind McMichaels' line, so he wisely decides to pull back.  However, he dismounts his two regiments on his left to face the rebel infantry there.

As the turn ends, a larger brigade of Union infantry shuffles onto the table via the Jonestown Pike.

Turn 6: To the north, Rogers' troopers splash across Brittle's Run.  One regiment is unable to brave the fierce fire of the line of Confederate defenders, but on the right, two regiments succeed in coming to grips with their foe.  The first round of the melee is a draw.  The second round, though, sees the Union cavalry overpower the rebs, driving them back fifty yards in disorder.
Smith draws back the two regiments on his right flank to allow Fredricks' massive brigade to attack down the Pike.  The dismounted 5th U.S. sends a volley at the 33rd Ga with telling effect.  One of the rounds finds General Turner, killing him instantly.
Parker's Confederate brigade comes on to the table just south of
Ripley's Station and march directly to the support of McMichaels' cavalry.

Turn 7: On the northern flank, General Purdy urges his men towards Brittle's Run to continue to pour fire into Rogers' disordered horsemen.  Despite his "poor" rating, he is coming into his own this spring morning.  Just as the Union line appears to be wavering, a shell fragment tears into Purdy and mortally wounds him.  He is taken from the field to a nearby farmhouse, but his wounds will prove to be fatal by the end of the day.
To the south, General Fredricks hurries his men down the Jonestown Pike and deploys his lead regiment into a line of battle.  McMichaels' men are scurrying for their horses as Parkers men filter through them to take up a position behind the stone wall.  The rebel cavalry has done its job of keeping the Yankees from crossing Brittle's Run.  Now it will be up to the infantry to hold the line against a quickly growing host of federal troops.

The Confederate cavalry has gotten the better of their Union counterparts this day, but just barely.  They have roughed up several Yankee regiments, but they have lost two brigadiers in the process.  This loss of leadership will make things difficult for the rebels in the next phase of the battle. 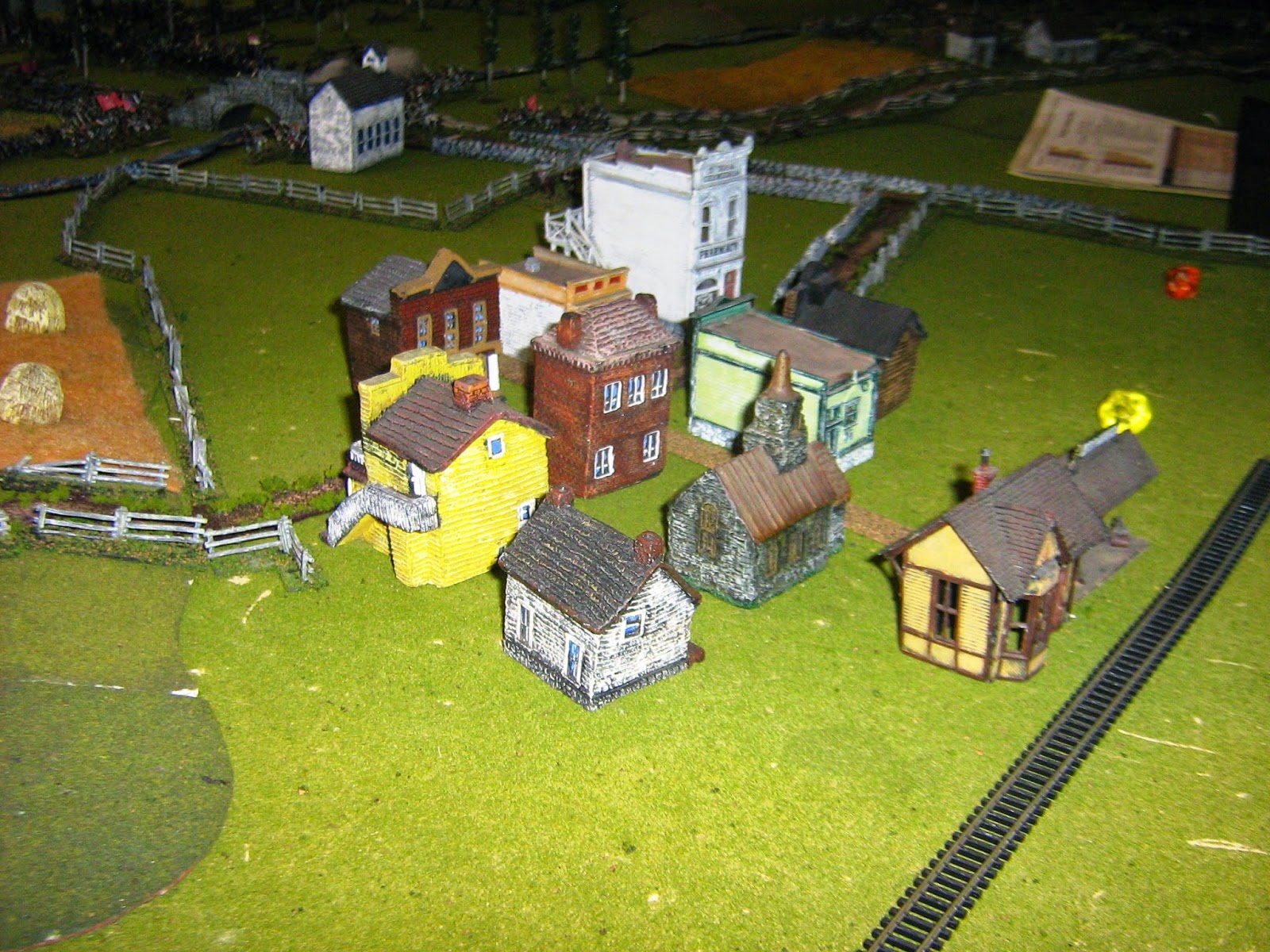 Ripley's Station is a vital rail hub northeast of Richmond.  In April of 1862 the Army of the Potomac has launched a major offensive to seize it.  This has caught the Army of Northern Virginia somewhat by surprise.  The attack force is made up of a division of cavalry and two divisions of infantry.  The Confederates have rushed a division of cavalry and a lone division of infantry to drive off the attackers.  The action begins at 6:00 A.M. on April 18, 1862.

Turn One: Smith's brigade of the 1st U.S. cavalry division leads the attack.  It rapidly marches up the Jonestown Pike northwest of Ripley's Station.  Smith's task is to clear any enemy units west of Brittle's Run.  McMichael's small brigade of Condederate cavalry is desperate to hold off Smith's men and buy time for Grupier's infantry division to arrive and form a defense of Ripley's station.  Purdy's 2nd brigade of rebel cavalry is also approaching through the town.  Purdy's inferior leadership skills are apparent as his men sluggishly meander through the town.  This stall's Turner's men.

Turn Two: The 3rd Ga launches a rash attack against the 5th NY.  In the confused fighting, the rebs are fortunate to push back the bluecoats.  Purdy arouses his men to a more fervent effort, allowing Turner's men to get through Ripley's Station.


Turn Three: It is now 6:30.  After two rounds of combat, the 1st Ga is defeated and forced to retreat.  But their sacrifice has allowed the other two regiments of the brigade to dismount to defend the crossroads. Roger's brigade of U.S. cavalry is following up Smith's brigade and moving to the left hoping to capture a small bridge over Brittle's Run.  The 1st Ma charges headlong into the 1st Va on the bridge and is able to force them back.  But while this is going on, two of Purdy's other regiments are able to dismount and prepare defensive positions on high ground.  Meanwhile, a second Confederate infantry brigade, Parker's, arrives on the field.
Turn Four: Roger's is unsuccessful in restoring order to the green 1st Ma.  This is unfortunate because it allows the rest of Purdy's men to come into line along the other dismounted regiments.  Further to the south, Smith puts his horsemen into line in preparation of charging McMichael's dismounted troopers.  Turner's Georgians advance onto the flank of the 5th U.S. and deliver a volley into their flank, but this merely disorders them

Posted by Duke Winser at 3:10 PM No comments:

I was picking up after my Civil war solo game. During the battle a casualty stand was put down each time a stand was lost. During the course of the conflict, the Union lost a total of 40 stands, the Confederacy 65! I was stunned at the difference. The main reason for the discrepancy was the ill fated rebel assault on the stone wall. Three brigades were literally shattered in their valiant yet vain efforts there. The other surprising statistic was the number of general officers that were lost. The Yankees lost three brigadiers and a divisional leader; the Rebs lost dour brigadiers.
Posted by Duke Winser at 8:19 AM No comments:

With school just around the corner, time has run out on my ACW solo game.  In the final analysis I'd have to say it was a bloody draw.  Neither side was able to breakthrough his opponent's line.  If and edge has to be given, I'd say it would go to the Union.  Their line held firm and they were gaining an advantage on the Confederate left.  Additionally, the rebels' attack on the stone wall was repulsed with very heavy casualties, as the photos will attest to.  Where the gray and butternut did have an advantage, on their right flank, the loss of general officers brought their momentum to a halt.  They lost a total of four brigadiers out of eight.


This was a very fun game.  I like using the casualty stands as they give a good record of where the fighting was the hottest during the battle.  I have made a sufficient number of them so that I can put one down each time a stand is lost in the game.

There were a lot of units to maneuver, so each turn took quite a bit of time.  But that is always going to be the case in a large game like this.  On the plus side, with so many brigades in action things tended to even out.  However, there were a couple of crucial die rolls that were quite exciting.  At the very end the rebels had a chance to break through at the wall.  One regiment actually got across the barrier and came to grips with a green unit.  It had a real chance of winning, but a roll of "1" pretty much ended that foray in an emphatic way!
Posted by Duke Winser at 5:18 PM 1 comment:

I just finished up rebasing all of my ACW figures for Regimental Fire and Fury.  I now have the ability to field just about any order of battle for either side up to over a corp in strength.  This is a good thing for when I do my summer class.

I have also set about setting up some "fictional" orders of battle, making up the commanders' names and rolling for their abilities and for the units' ranking.  I put a corp on the table for each side.  Most of the units are trained or green to start with, but I'll adjust their classification based on their performance in battle.

Here are some pictures from my first action with these made up armies.  It has been fun pitting them against each other.


In five turns of play several commanders have been killed or severely wounded on both sides.  One Union division lost a brigadier and then the divisional commander when he tried to take control.  As many of the units are trained or green, they are fairly brittle.  Four have broken on the rebel side trying to shake off disorder or as the result of suffering extremely high casualties in attempting to assault stone walls.
Posted by Duke Winser at 4:54 PM No comments: