This small episode involves a small Union force given the task of delivering some supplies to the front line via a wagon. The force is comprised of a group of cavalry, five groups of zouaves, and a group of Berdan's Sharpshooters. There are five leaders in all.

Here is the battlefield: 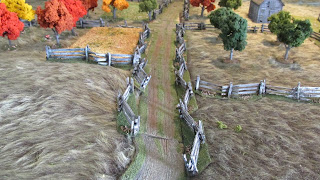 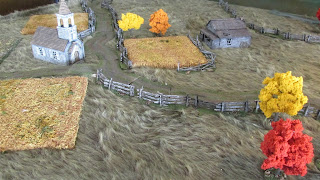 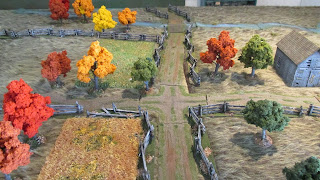 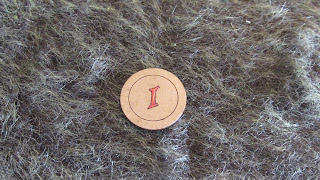 Turn One saw the Confederate cavalry enter and move 12 inches beyond the entry point. The Union cavalry entered as well, along with some supporting infantry gormations. 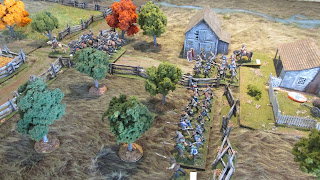 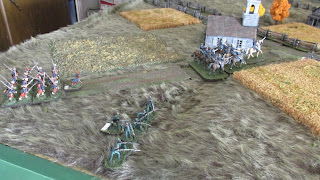 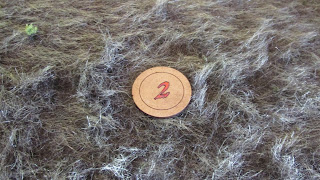 Turn two: both cavalry groups moved aggressively up the road. At the end of the turn they were in position to charge one another. 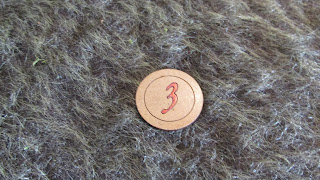 As other infantry units entered the game at the opposite entry points, the rebel cavalry's chip was drawn first and they charged. Unfortunately, they didn't have any flags on hand to avail themselves of the "Colt" option of firing before they went in. When the dust cleared, the rebs had been thrown back and had also lost their commander to a wound. The Confederate moral dropped accordingly. 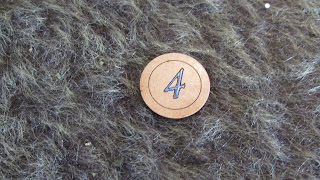 On turn four the chips fell in favor of the Confederates. A group of skirmishers were able to fire at the regrouping Union cavalry and drive them off. 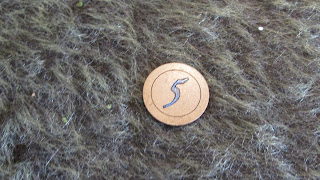 Both sides brought more units into position on turn five. A second group of Confederate skirmishers were able to put some shock on the zouaves. 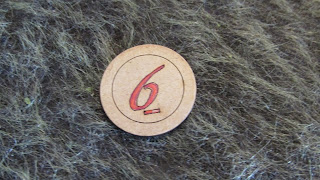 Turn six saw mixed results for both sides. On the rebel left its two groups fired at the sharpshooters. Remarkably, despite throwing 17 dice, no damage was inflicted. The green clad riflemen, however, did considerable damage to the rebs, even killing their commander.
On the other flank, the Union was not as lucky. One of their groups suffered three kills on the first volley. Driving off the skirmishers in front of them only allowed the formation behind them a clear line of fire. 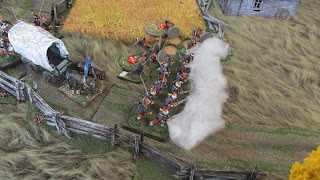 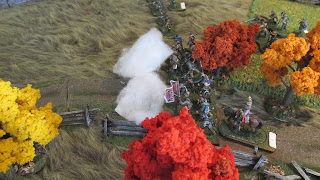 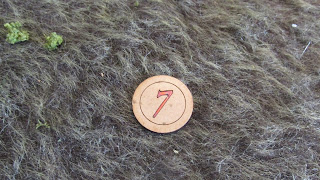 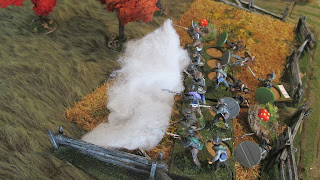 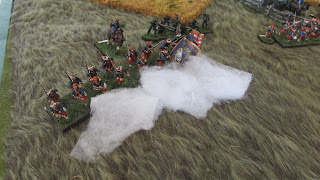 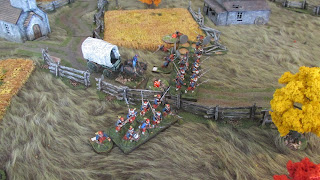 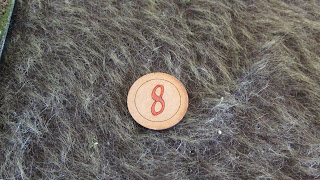 Turn eight was the tipping point of the battle. The chips allowed the Confederates to fire continuously into the Union formation on the road. Shock and casualties mounted, breaking the formation and driving back a unit. The Union moral dropped significantly as the rebel commander cashed in four flags to fire yet another volley into the already faltering Union line. 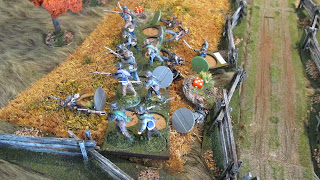 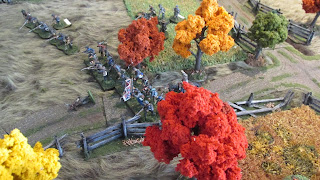 As the game was drawing to a close the chips once again favored the Confederate side. On turn nine, the zouave units on the road were both broken by double the shock and ran away. The result was a dip in the morale to just two. The rebels were also in danger of breaking as the leaderless units on their left suffered terribly from repeated volleys from the sharpshooters and zouves facing them. 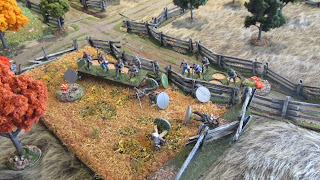 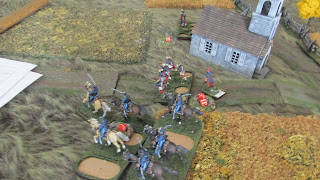 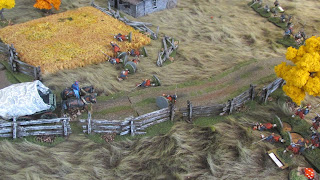 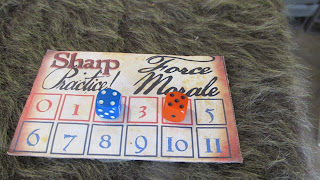 Turn ten was the final turn. Both sides were on the verge of dropping to zero morale. Once again, the chips fell in favor of the rebels. The chip for the strongest Confederate formation was drawn with two flags available to it. "Rebel Yell" was declared. The grey line fired a volley into a group of zouves and then rolled three dice to see if they could close. Two sixes and a five were more than enough. The rebs were able to throw 14 dice to the Union's 7. The results were predictable. The Union group was destroyed and their morale dropped to zero. Additionally, two groups of skirmishers advanced on the supply wagon and would certainly be able to capture it the following turn. It was clearly a Confederate victory.

I enjoyed the game. I got to have a cavalry charge and a chance to use "Rebel Yell." Very entertaining.
Posted by Duke Winser at 2:22 PM